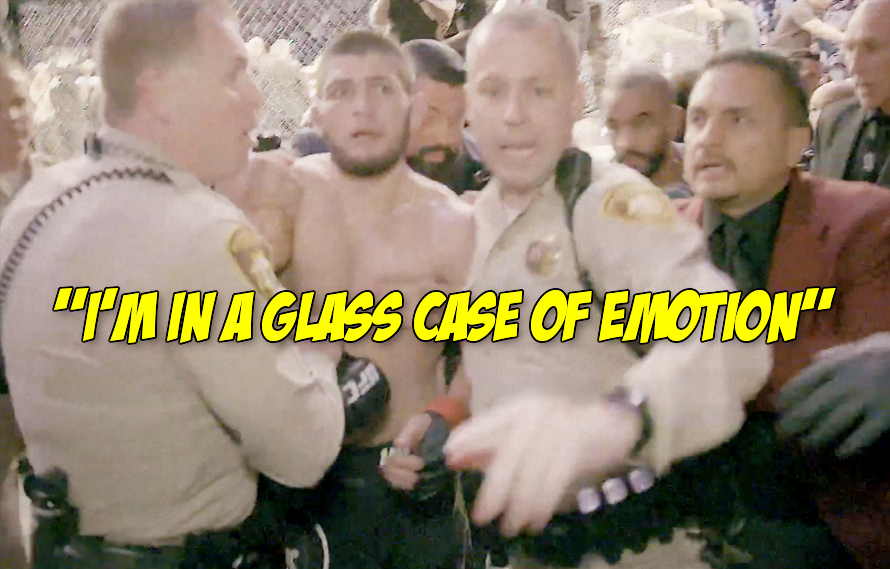 This is an interesting way to promote UFC 242. Making Khabib Nurmagomedov look awkward as all hell is a strategy.

Bold choice, let’s see how it plays out for the UFC.

Taking place at UFC 242 at The Arena, Yas Island in Abu Dhabi, United Arab Emirates is already a weird spot. The pay-per-view will air in the afternoon here in the United States. UFC is punting on PPV buys in the name of UAE officials paying them a huge site fee.

It’s weird that the UFC would follow up Khabib’s star making win with a PPV a large portion of fans will miss. There will be a ton of fans who tune in at the normal pay-per-view time and not realize the event already took place five hours earlier.

Almost a year after the UFC 229 brawl, Khabib Nurmagomedov is back fighting again. Remember when Khabib attacking Team McGregor was the worst thing in MMA ever? Good times. Now the UFC is using the brawl to promote Khabib’s next fight.

It’s fine. The entire MMA world already knew this was coming. In celebration of UFC 242, the UFC released new footage of Khabib losing his god damn mind at UFC 229. It’s some good video, with new angles and clean HD picture of the whole thing.

The problem is Khabib comes off has an unhinged weirdo in the new clips. The UFC Countdown shows, produced by the promo, are not meant to turn off fans. UFC just throwing a potential star right under the bus with these new clips.

10/10 would delete off The Internet, for the sake of Khabib’s image.

Check out the full video below from UF2 242 Countdown: Khabib Nurmagomedov vs Dustin Poirier.

Dustin Poirier: If I Beat Khabib, 'I’m Going To Forever Be A Part Of The Best Of The Best'
Read Next Post →
Click here to cancel reply.