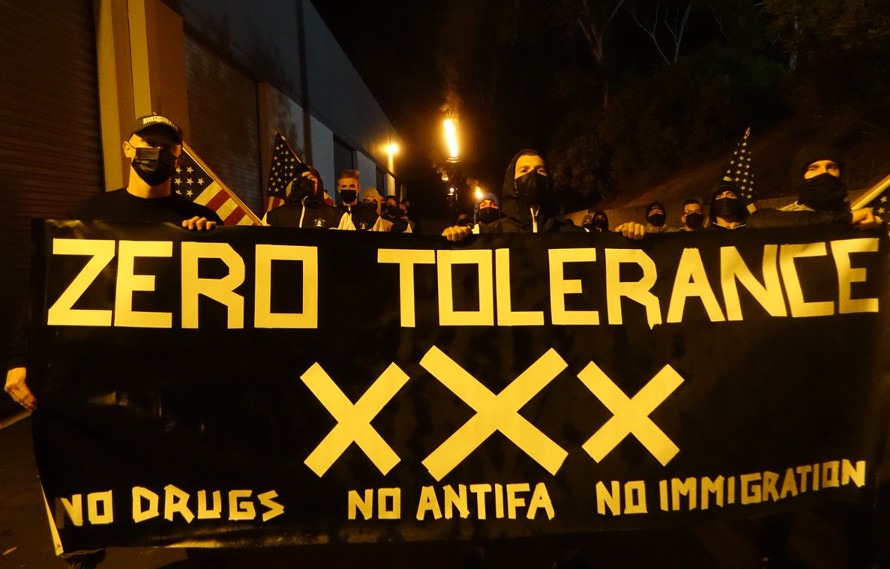 Just one of those post where we’re interested in the topic but want to get out of the way and let the experts have at it. Let’s talk white nationalist/Alt-Right MMA fight clubs.

Have all unfortunately been attracted to the sport of two humans fighting inside a cage.

So. Much. Misdirected. Hate.

“As Yankova has entered the MMA scene in America, so too have violent groups inspired by White Rex. The Rise Above Movement (RAM), a collective of California white nationalists who train in mixed martial arts and boxing and who have battled their way through recent politically explosive rallies and protests, frequently post White Rex videos on their Twitter page and generally seem to worship the Russian clothing company. “Check out this organization from Russia,” they wrote in August, linking to a video from White Rex’s “Birth of a Nation” fight night. “Great white pill.”

“A lot of these groups play up the victimization narrative. They see themselves as cornered against forces trying to eliminate them. The option of responding, even violently, is justified.”
RAM, which calls itself “the premier MMA club of the Alt-Right representing the United States,” made its public debut on March 25 at a “Make America Great Again” rally in Huntington Beach, California, that drew more than 2000 Trump supporters. Fancying themselves guardians of Western civilization, they showed up with an anti-Semitic sign and a banner that read, “Defend America.” Some of its members’ clothing and tattoos betrayed their affiliations with South Bay Skins and Hammerskin Nation, notoriously violent skinhead gangs. In photos and videos shared online, RAM fighters can be seen in brawls with counter protestors and antifascist activists who attempted to block the Huntington Beach procession. One RAM member threw a masked counter protestor to the ground and pummeled him with his fists and elbow. Another, alongside someone not affiliated with the group, attacked a writer from OC Weekly, repeatedly punching him in the face until someone nearby fired off a blast of pepper spray.”

“Joanna Mendelson, a senior investigative researcher at the ADL, calls RAM “an alt-right fight club.” She notes that RAM’s slickly-produced propaganda videos, with the ramped up music and “rosy picture of drug-free physical strength training” are made to “recruit their base” and fuel radicalization. Though several of their members have previously been “strung out on drugs,” as ProPublica put it, they emphasize straight edge culture—the prohibition of drugs and alcohol, in the context of white nationalism, as a means to keep “pure blood” in their veins.

They blend imagery prevalent within the European and Russian extreme right, everything from tagging their moniker on walls to their fashion choices, haircuts, and shirtless training scenes. RAM members don skull masks and tape their hands when they descend on rallies to fight their ideological foes. Like the Polish rapper Bujak, whose music videos celebrate hooliganism and mixed martial arts in the service of white nationalism, RAM mocks that “if [you’re] not training [you’re] alt lite.”

For more reading on the topic check out 2017 MMA journalist of the year Karim Zidan of Bloody Elbow and his story from last October ‘Fascism in MMA: How White Rex, with ties to neo-Nazi ideologies, thrived as an MMA promotion and clothing brand’