Natural or Expendable? Larry King talks to Randy Couture about Hollywood and his part with the UFC 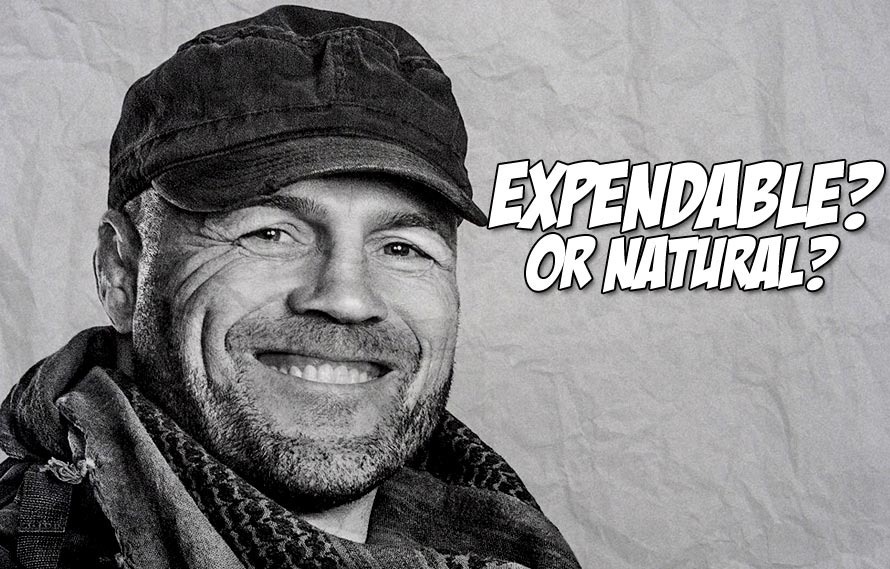 Larry King was born at the tail-end of the Great Depression, during the golden age of radio. To put things in perspective, there were only five thousand working television sets in the United States when he was nine years old. Eighty years later, he is looking to become King of the Internet, hosting one of Hulu.com’s top click producers, the Emmy-nominated Larry King Now.

Larry’s online incarnation has shown some interest in Mixed Martial Arts. For instance, he’s interviewed Dana White and even allowed Liz Carmouche to cradle him in a rear naked choke.

So Liz squeezed harder. If you listen closely, it sounds like his neck is crackling like 80-year-old bubble packaging.

But Larry King is fearless, and by all signs, indestructible. So he invited Randy Couture to the set last week, and they talked about Expendables III.

The movie opens in two days, and Couture is reprising his role as Toll Road, a demolitions and grappling expert who enjoys talking about cauliflower ear. According to Randy, the name is significant because “if you’re going to get past him, you’re going to pay a price.”

But Couture had his first exposure to the movie industry a decade ago.

“I got the opportunity twelve years ago to be on set for the first time, Cradle to the Grave. They were looking for fighters to create an authentic fight scene . . . I had one line in the movie, but it was the first time kind of seeing behind the curtain how it’s done. The process. And I immediately became intrigued with it,” he remembered.

“Once you kind of see behind the curtain and how they’re made, it changes you. It changes how you see them.”

He says that it took him a while to realize that he had a brand that could be marketed in areas other than fighting, and that his window to make money as a fighter was limited.

During the earlier incarnation of Expendibles, Randy was the only “combative sports athlete” among the cast members, with the exception of Dolph Lundgren, who had done some contact sparring. Now, he is joined by Ronda Rousey, who he calls “the Queen of MMA.”

“I think she liked it. She showed up prepared. She was ready to go. She was fun to work with . . . she was great.”

Interestingly, Randy’s nickname “the Natural” has nothing to do with being content with mortal testosterone levels. After he fought Vitor Belfort in 1997, his third fight, Joel Gold of Full Contact Fighter said, “Oh man, you adapted to Vitor’s style. He’s been beating everybody and you kind of beat him at his own game. You’re a natural. Can I call you that?”

“I’ve been called a lot worse things, I suppose that’s fine,” he said.

And he has been called worse things. Specifically, his relationship with the UFC was strained after he parted the company in December 2012. “Spike offered me a fantastic deal to do more television and be involved and I wasn’t really getting those offers from the UFC. I was doing some commentating for Fox but it was a fairly small deal.”

As a result, he believes his son Ryan, who was released from the UFC after back-to-back losses, suffered some collateral damage.

“My son was trying to compete in the UFC, and I don’t feel like he got a fair shake from Dana, and I think that was directed at me. That’s the only issue that I really have.”

But if questions of loyalty are shelved, and the bottom line is what ultimately matters, the hard feelings probably don’t. Because Randy has expanded his brand into “a chain of gyms, a clothing line (Extreme Couture MMA), a supplement company, a foundation honoring vets, and a company focused on training professional athletes using MMA techniques.”

Whatever you think of Randy Couture as a fighter, person or actor, he is becoming a mainstay in the action film genre. The question now is whether that acting career will continue and mature, whether he really is a natural, or whether he will prove to be expendable.

A Lesson in Subway MMA: Unorthodox head movement can only get you so far
Read Next Post →
Click here to cancel reply.