Nate Marquardt elbowed off a chunk of Tyron Woodley’s face

Elbowing off your opponent’s face is just another side-effect from being managed by MC Hammer’s ‘Alchemist Management’ — your elbows are just too legit to quit beating up someone. Most people out there won’t understand that reference because they never grew up in a period of time in which parachute pants were acceptable in society.

After Marquardt’s inhuman knockout of Tyron Woodley this past weekend in Strikeforce, representatives from the planet Krypton accused Nate Marquardt of stuffing his gloves with green kryptonite. Upon further investigation, the dude just has rawesome running through his veins. We’ve thrown that imaginary product around for years now, but there will be a day when you can walk into your local Wal-Mart and pick it up from the energy drink aisle. If Steven Seagal can do it, so can we. Actually, that statement should be: ‘If Steven Seagal can do it, there’s no way in hell you can do it without accidentally breaking your neck – or have Stevan Seagal intentionally break your neck for thinking you can do what he can do.’ That’s too long of an idiom to remember, so maybe we’ll hold off on introducing ‘Rawesomeade’ to the beverage market and show you this pic of Tyron Woodley’s face. Notice a chunk of it has been removed, compliments of Marquardt’s elbow. Big thanks to ku3mm3t for the find. 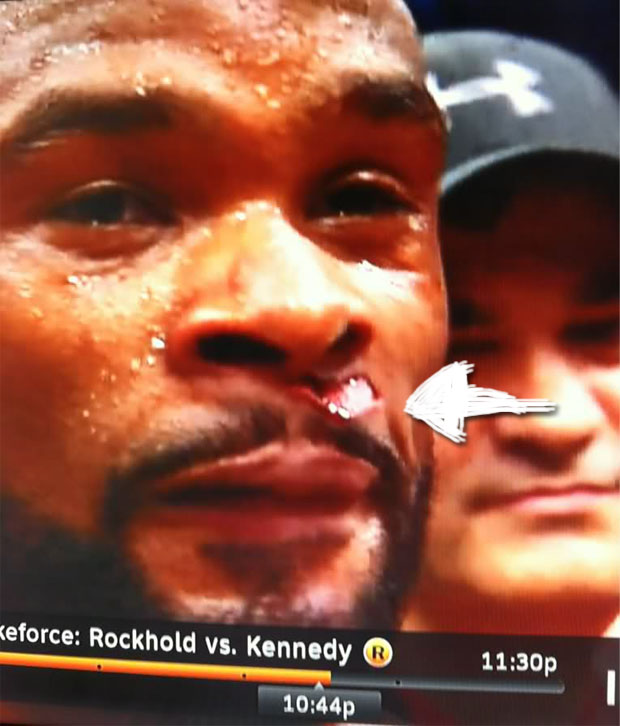 Gegard Mousasi finally talks about where the heck he's been for the past year
Read Next Post →
Click here to cancel reply.