Mother of God, Tank Abbott vs. Warpath is going down April 13th

Her name is Christmas Abbott and as of last week she’s NASCAR first female pit crew member. She also served for years as a civil contractor in Baghdad — and she’s an absolute beast in the gym. Don’t expect her to follow her father’s footsteps, however. She won’t grow a gnarly grey beard and write one of the greatest works of fiction mankind has ever seen. Hopefully we’ll see Christmas Abbott in the corner of her pop’s return to MMA on April 13th in King of the Cage against none other than Warpath.

That’s his name, Warpath. No one knows his real name because he sold his soul to Satan. Warpath rocks a one-piece when he fights, along with hefty dose of eye makeup to show that he’s related to Nightwolf from Mortal Kombat 3. Although Warpath has gone 1-8 in his previous nine fights, he did scoop up a first-round knock out against Don Frye back in 2011, which has to count for something.

Warpath vs. Tank Abbott goes down at the Gold Country Casino on April 13th in Oroville, CA — which probably means we’re going to pack up the MiddleEasy Mobile and make a road trip to the middle of nowhere to watch these two titans clash. Check out the epic fight poster below. 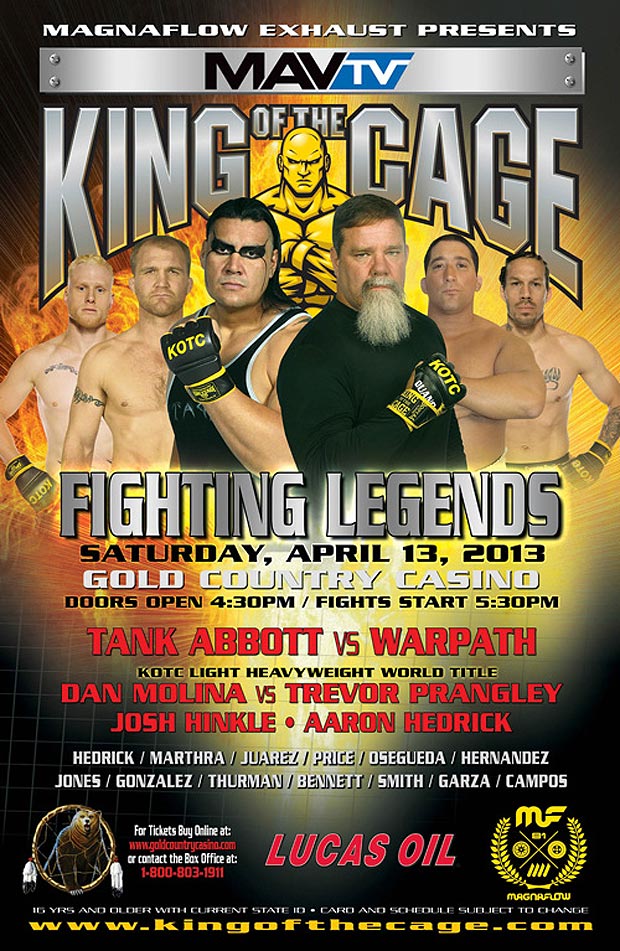 Melvin Manhoef vs. Brock Larson is slated for the next ONE FC event
← Read Last Post