Molly McCann recounted the time when she saved a girl’s life in Liverpool.

During her early days in the sport, Molly McCann worked at a Subway store to support her dreams of making it big in MMA. The fan-favorite sure arrived on the big stage and is making her name. She’s coming off a spectacular spinning back elbow knockout over Luana Carolina at UFC London in March.

There was a time when McCann pulled a ‘Kevin Holland’ and proved to be the real-life superhero.

Molly McCann saved a girl’s life at a Liverpool Subway

In an appearance on the True Geordie podcast, ‘Meatball’ shared the story of when she saved a girl’s life while working the graveyard shift at a Subway in Liverpool.

“I was working in Subway, I was about 23. It was a night shift and it was like five in the morning so I’m still cutting sandwiches trying to stay awake. Some girl stumbles in, and then this man’s come over to her and put his arms around her.

“He was a foreign man and his English wasn’t too great and I knew she was like, she sounded Welsh. What’s the connection there, how’s that happened?

“So anyway, me and the man just go have a murder and he dragged the girl and tried to get the girl out of the shop. Me mate Samira’s running to the back. I’ve run outside to go and get them.”

McCann got into a fight with the attacker

McCann sensed something was wrong and confronted the man over it. Once she realized what he was trying to do, things got physical.

“As I’ve run outside, he’s gone to head kick me and I’d laid back and just chopped his leg. But before the fight kicked off, he’s on the phone and rang back up so a few cars pounced into this road. This is Stanley Street so this is like central Liverpool. Five o’clock in the morning, birds tweeting, like when you come out of the nightclubs you’re like whoa!

“All these cars have come out and all these lads are in the cars but where Samira’s ran, in the back she’s rang the bizzies. I’ve come out to straighten it with this lad. He’s f**ked off. The bizzies have come in, locked the shop, trying to take statements out of this girl.

After the police had received statements from the girl, they found out that the man was trying to traffic her. He had sneaked in a date rape drug in her drink at a nightclub and then followed her to the Subway in an attempt to take her away.

“Then, he was trying to get her in the car and human traffic her. Basically, I’ve clocked it and caught him and then he got picked from the bizzies. He was an illegal immigrant and he got deported and sent back to wherever he was from.”

Molly McCann’s heroic efforts saved a girl’s life that day. Had she not been present at that moment, a worse fate could’ve awaited the almost victim. McCann will return to action against Hannah Goldy on July 23 at UFC London. 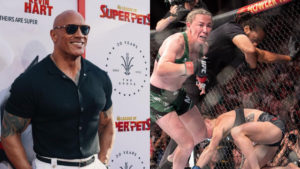 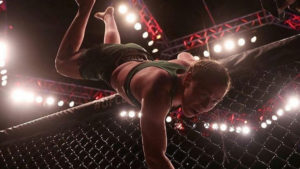 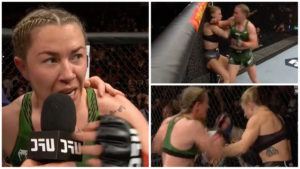 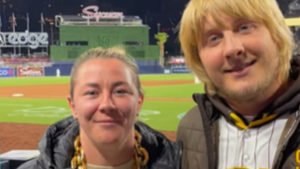