Both Mike Perry And Mickey Gall Want A Fight!

Is there a better thing than two fighters who agree for a match? Well, Mike Perry and Mickey Gall did the job instead of UFC officials. “Platinum” and “The Sea” are definitively two men who can make a deal!

Mike Perry (12-4 MMA, 5-4 UFC) is coming off a painful loss to his former teammate Donald Cerrone at UFC Fight Night 139 on November 10, 2018. Cerrone did an outstanding submission switch from triangle to armbar to win the fight. Yet, it looks like “The Cowboy” overextended rival’s arm since Perry ended the match with a nasty injury.

Mickey Gall (6-0 MMA, 5-0 UFC) has five victories in MMA, all five via rear naked choke. Some of his notable victims were CM Punk, Sage Northcutt, and George Sullivan. His only loss came to Randy Brown via unanimous decision at UFC 217 on November 4, 2017.

”[Cerrone] was in the gym with Gracie Barra drilling in the gi, grappling all the time,” he said on Ariel Helwani’s MMA Show. “He was with Mickey Gall too, let’s fight that motherf**ker. I’ll fight Mickey Gall. F**k Mickey Gall. I’m gonna get into the gym, go grapple, and I’m gonna crush everybody from here on out.”

Mickey Gall waited several days to reply Perry’s callout. Take a look at his Instagram video below! He wished happy Thanksgiving to everybody, then announced he wanted to face Perry as soon as possible!

”F**k Mike Perry,” Gall said. “I heard him call me out on Ariel [Helwani]’s show. Says he wants to fight. Aight, motherf**ker, careful what you wish for. Let’s fight. Let’s fight January 19th in Brooklyn on that first ESPN UFC card.”

”They actually offered that fight to your boy Diego,” Gall continued. “He said no because he doesn’t want to fight until March. Well, in the spirit of Thanksgiving I’m going to smoke two turkeys. I’ll beat up Mike Perry on January 19th in Brooklyn on ESPN and then I’ll go and beat up Diego in March. Gobble gobble, bitches.”

Both fighters want the match – great! Unfortunately, there is one problem – Perry’s arm! Luckily for him, it is not broken! He shared the photo of his arm on Instagram Story, with the following description. 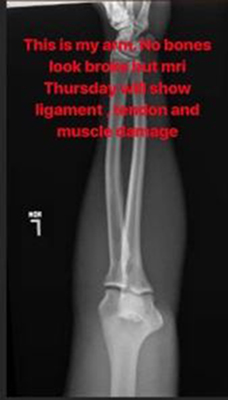 “This is my arm. No bones look broke but mri Thursday will show ligament, tendon and muscle damage”

After Gall’s video, Mike Perry posted an interesting tweet. According to Perry, he’ll know more about the potential date of the fight when he gets more info about his arm injury.

Always good stuff happening in the fight world. A lot to catch up on over the weekend. @Alistairovereem wins @francis_ngannou wins and @ChuckLiddell did not win but is a legend ! I’ll be back grappling this week. I’ll know more about my arm like when I can beat up @mickeygall 💣

Always good stuff happening in the fight world. A lot to catch up on over the weekend. @Alistairovereem wins @francis_ngannou wins and @ChuckLiddell did not win but is a legend ! I’ll be back grappling this week. I’ll know more about my arm like when I can beat up @mickeygall 💣

Sounds like a great matchup, right? Would you like to see Mickey Gall Vs Mike Perry? It would be another match between striker and grappler! Will UFC approve this match?