Never before have I seen so many MMA fighters and celebrities huddled over one videogame (or any videogame). Urijah Faber submitted me in EA Sports MMA while Frank Shamrock stood behind us yelling ‘Oh shit! You got schooled!’. I wanted to jump on the nearest buffet table and scream ‘This is the most ballerish thing ever!‘. I didn’t though. The president of EA was in the room and would have axed us from having any future access to EA’s VIP parties. Oh, Tila Tequila was there. A chick that was even dwarfed by the water cooler.

We were all gathered there to play the hell out of EA Sports MMA and for about a solid half-hour, it was just me and this dude from G4 rocking the modified Xbox 360 console. The game didn’t run off a disc. We were playing EA Sports MMA directly from the developers console and at one point, Jason Barnes reset the console because of some issues with clipping/lagging in the game. When the console rebooted, I scrolled down to the file (there was also another program available on the developer kit, didn’t get a chance to see what it was) and cranked up the game. Most of the options in the menu were grayed out aside from the ‘Arcade’ mode and ‘EA Live Broadcast’.

Once you push ‘A’, you’re greeted to a row of five weight-divisions and beneath it is a sub-menu of various options you can choose. The first option on the sub-menu lets the user select what rules the fight will take place under. The coveted ‘Pride’ rules were labeled under ‘Japanese’ (which also consequently makes the first round ten minutes). Just underneath, you can select the venue and the type of arena the fight will be held in. Each venue gives the user the choice of holding the bout in a boxing ring, circular cage or hexagonal cage. We chose to roll with the lightweights in a Pride ruled match held in the UK inside of a boxing ring, I was Hellboy Hansen and the guy from G4 chose Gilbert Melendez.

Jason Barnes gave us a brief tutorial as both of our fighters aimlessly roamed around the ring. Every strike you throw in the game is executed with the right analog stick. I’ve never played any of EA’s ‘Fight Night‘ franchise so I have to admit that it threw me off a little. It’s somewhat counterintuitive since our gaming generation is so accustomed to ‘punching’ by striking a button as opposed to gliding your thumb over an analog. To throw a kick, you need to hold the left trigger and then use the right analog. The right trigger was to block, I believe the right bumper was to taunt, ‘A’ was to advance, ‘B’ to prevent any advancement (i.e. sprawl when someone tries to take you down), ‘X’ was to execute a submission and ‘Y’ is to stand up. A heavy emphasis seemed to be around ‘dashing’ which could be done by flicking the left analog in the direction of your opponent. It’s handy for closing the distance and also stringing together a chain of combos. Alternatively, you can flick the left analog stick in the other direction to quickly evade your opponent and then use the right analog stick to catch your opponent at the same time.

EA seems to really be sticking with the notion that every fight has their own unique skill set. For example, Gilbert Melendez can’t pull off any high kicks. It’s somewhat frustrating until you realize the rest of the striking arsenal El Nino possesses. When I played as Joachim, I defended one of Gilbert’s takedown with a flying knee. 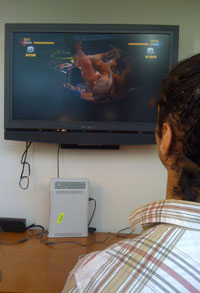 Timing seems to be the overarching theme in EA Sports MMA. To defend takedowns, you must push the ‘B’ button within a very small time-frame. The same goes with countering/evading strikes. When the fight goes to the ground and your opponent is attempting to pull off what Jason Barnes called a ‘joint submission’ (arm bar, heel hook), your stamina bar appears and you must cautiously tap either the ‘X’ button if you’re executing the submission or ‘B’ if you’re defending. With each tap, your stamina drops and slowly refills. I didn’t fully understand what was the goal here other than to prevent button mashing and outlasting your opponent’s stamina. Sometimes, my guy would tap out with a near full bar of stamina while other times I would escape with the same amount. However, the highlight of the ground game was undoubtedly choking out your opponent. If I could give one element of EA Sports MMA some ten-foot high, multi-tiered trophy, it would be defending a choke submission. It’s simple, competitive and above all else, just incredibly fun. When you’re being choked, a ring appears on the screen that occasionally lights up in different areas. The goal is to push your left analog stick in the direction of the highlighted area of the circle as soon as it appears on the screen. If you’re not quick enough, the area goes away and then reappears in a random location. After consecutively beating your opponent to the highlighted area, your field of vision expands and you eventually escape. However, if you continue to miss your opportunity, the circle becomes smaller as well your fighter’s perception. Now that was the suggested way. As we played the game, we treated these ‘constriction battles’ as if we were ‘digitally lockpicking’. As you find the ‘sweet spot’ within the circle, your controller vibrates. In theory, you could win a submission battle without even looking at the screen but just ‘feeling out’ the vibrations as you slowly rotate the analog stick. It became so competitive that when the fight began, we would immediately take it to the ground in order to work our choke submissions which had great mini-game feel to it. I really hope EA chooses to go with this method with all submissions. It was one of the most entertaining parts of the game.

The fluidity of EA Sports MMA is remarkable. Coupled with a ridiculously fine attention to detail and it’s easy to tell that it’s an EA product. The second you play the game, you realize exactly why Electronic Arts has dominated every sports genre they’ve touched. We were there in Chicago last year when EA unveiled the game to the media for the first time. A few of us gasped in amazement when EA showed the first image of the game which consisted of a rendering of Fedor Emelianenko and Brett Rogers. Since then, the game has developed beyond those still images to a thoroughly entertaining experience. In fact, I was so enveloped in playing EA Sports MMA that I missed every undercard at Strikeforce Los Angeles. There’s a reason why the EA Sports MMA booth at the E3 conference is running out of space to place their award nominations. The game is solid and if I weren’t surrounded by so many fighters, I would have made an attempt to covertly place the developer’s console in my backpack and run out of the Nokia Theater as fast as humanly possible.

Extra Super Bonus: There’s a lot of stuff that I unintentionally left out of this article so I’ll just place them here in easy to read sentences for all you people out there that are low of Ritalin. Mariusz Pudzianowski is not in the game. There’s a good chance Big Black will be an unlockable character. Lightweights strike faster than heavyweights. The game will likely ship with an ‘catchweight’ feature. Some amazing strikes can be executed by randomly twirling around the right analog stick as you dash towards your opponent. The roster on the game that we played was not complete. Nick Diaz fights like Nick Diaz and after he wins, he celebrates like Nick Diaz. EA Developer Robert Hyder(?) waxed me in the game. MiddleEasy was one of the few, if not the only MMA media outlet accepted to EA’s VIP party.  Playing with Fedor is like enabling god mode in the game (as it should be).

And here’s the moment you’ve been waiting for… 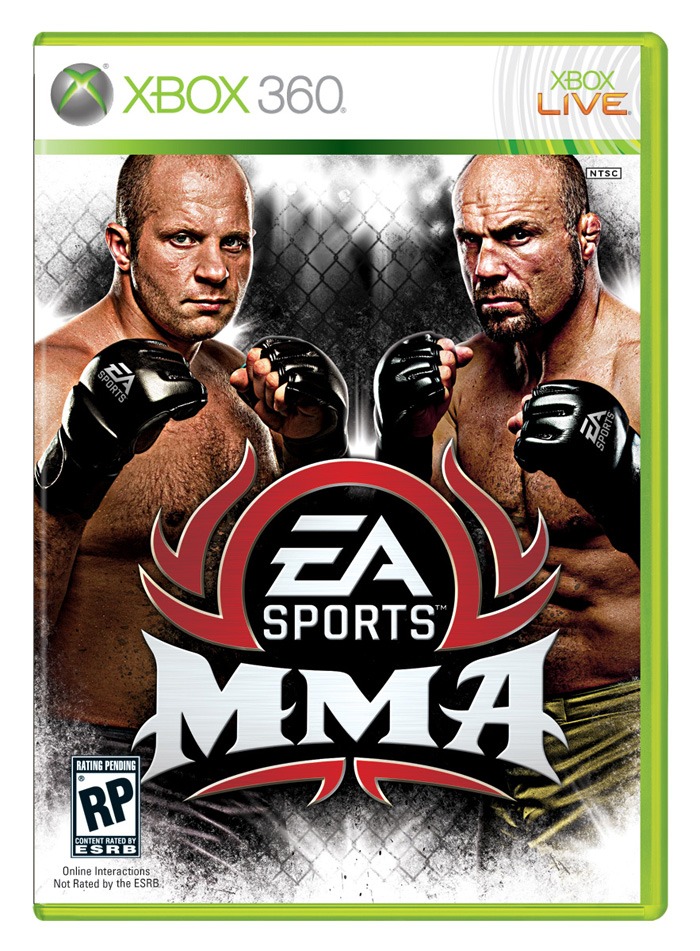