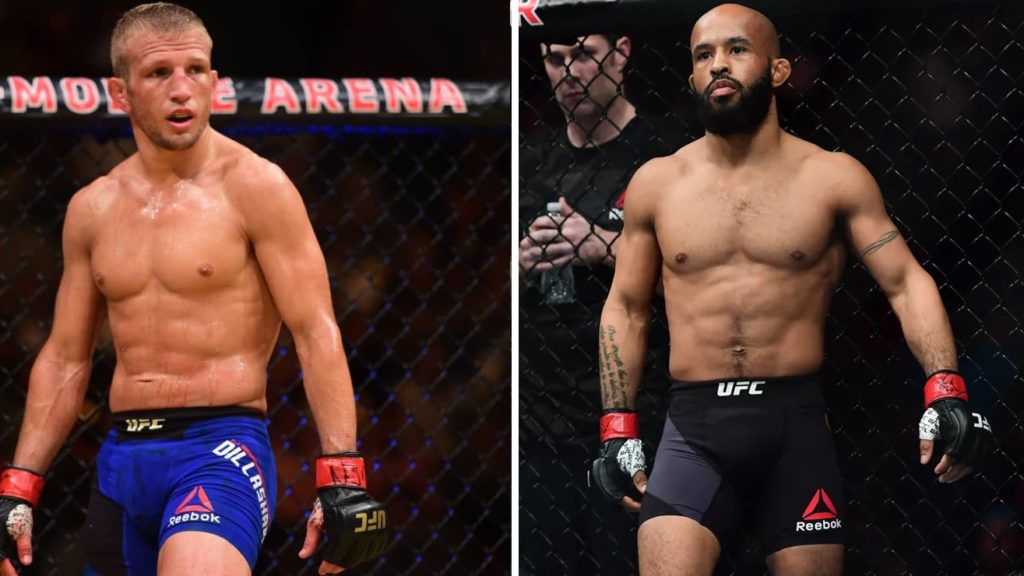 The talk about a proposed super fight between UFC bantamweight champion T.J. Dillashaw and flyweight titleholder Demetrious Johnson has been discussed for quite a few months now. That’s the fight both men want; it seems to be stuck in a mire of unsuccessful negotiations.

But former UFC middleweight champion Michael Bisping strongly believes that this super fight needs to be made and said it’s a shame that nothing is official yet.

“That is kind of frustrating because Demetrious Johnson, I’m telling you, he probably is the pound-for-pound best,” Bisping said on his Believe You Me podcast (h/t MMAFighting.com). “When you look at the way he performs, you think, ‘Yeah, he’s pound-for-pound the best,’ but then you look at his opponents and it’s like, I can look fantastic if I’m fighting my daughter. I can do crazy s**t. I can pick her up and suplex her and put her in an armbar. I could pull off the sickest submissions if I was doing it against a 12-year-old girl.

“I’m not saying that Demetrious’ former opponents are like that of a 12-year-old girl – maybe 15,” Bisping continued. “You see the point I’m making. Some of the competition has been very, very good but that’s always been the classic, cliche, knock on his career, that the competition hasn’t been as good. Then we hear about TJ vs. DJ and it’s like, ‘Wow, here’s an opportunity where Demetrious Johnson can prove that he can beat somebody like TJ Dillashaw.’”

“You’ve got to give DJ his credit. He’s incredible. He’s always looking for the finish. He’s exciting, he really is. But the competition, unless you were a hardcore MMA fan, you wouldn’t know who the hell they were if you walked past them. I’ll be honest, I wouldn’t recognize some of those guys and I live and breathe mixed martial arts. If some of those guys walked past me in the street, I wouldn’t know.”

Johnson who is holding a record-setting 11 consecutive title defenses under his belt, but his successes have gone virtually unappreciated by the UFC audience, with his PPV showings regularly providing some of the worst box-office numbers the Promotion has ever experienced.

However, Bisping argues that a fight with Dillashaw might be what it takes to earn Mighty Mouse the kind of hefty purse he deserves.

“Another knock [on Johnson] has been that he hasn’t been a proven draw,” the former middleweight champ said. “He hasn’t sold big pay-per-views. I don’t think that’s Demetrious’ fault. I think that’s just the trend that we see in combat sports. Super light weight classes like that have always had a hard time drawing at the box office. But him against T.J., that’s an interesting fight. That’s a fight that gets people to sit up, take notice, give him respect, and essentially, earn them both a lot of money.”

Do you agree with Michael Bisping’s recent comments?

Dana White is a Fighter... on the New DLC for EA UFC 3 & (Shockingly) He's a Beast
Read Next Post →
Click here to cancel reply.