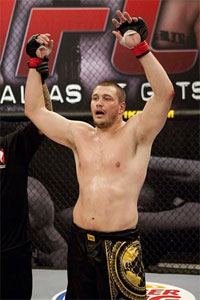 Damn, EliteXC Kimbo was far better than UFC Kimbo. Prior to this fight, Ben Fowlkes (former writer for CagePotato, now with MMAFighting) made a bet that if Meathead defeated Kimbo Slice at UFC 113, I would have to send him a shirt. It was a pretty good bet, but originally I proposed that the loser has to cross-dress at the next event they cover. Thank god we didn’t agree on that.

Unfortunately, Kimbo didn’t grind Meathead’s meat tonight. More like Meathead ground Kimbo Slice’s bread, or maybe his one-sided chest hair. Whatever Mitrione did, he absolutely dominated the Youtube legend while rocking a large ‘Kool-Aid smile’ throughout all two rounds. Kimbo started the fight with some amazing slams but after Matt survived the initial onslaught, Kimbo’s knees started to crumble like your GPA in your senior year of college. Props to Meathead on the win and hopefully Ben and I will have that cross-dressing bet sometime in the near future.