The news of Conor McGregor’s return shattered the internet. All of MMA Twitter was excited once the announcement of Conor vs “Cowboy” Cerrone was made official by the UFC. Although the matchup was heavily speculated previously, it still caused waves of excitement on the web. Although the news of the match is fresh, betting odds of the bout have already released. However, the opening fight odds are a lot closer than what some fans would expect.

Nick Kalikas from MMA OddsBreaker released the opening odds for the both. As a guest on the MMMOB Podcast, Nick gave his initial thoughts of the matchup. He also explained the fight’s opening odds.

As listed above, the main event bout between McGregor and Cerrone has very tight opening odds. And, while McGregor is as talented as he is, his opening odds throughout his fight career were never a landslide in his favor. 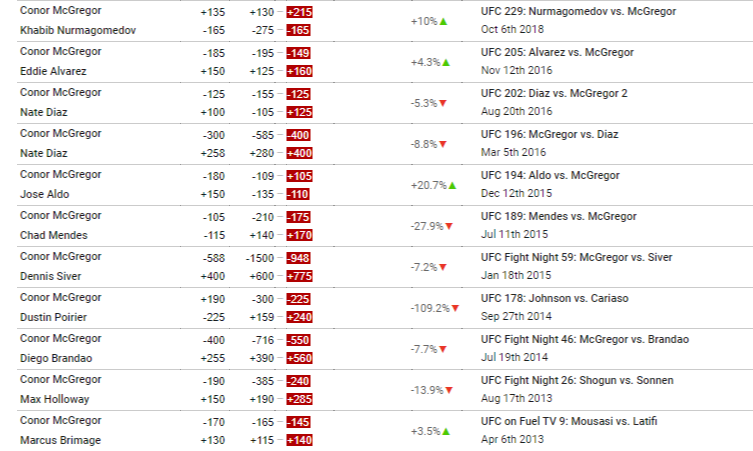 McGregor’s greatest opening odds in his UFC career came against Dennis Siver with -588 odds in his favor. Conor’s smallest win odds came against Chad Mendes with a razor-thin -105 spread at UFC 189.

Nonetheless, Kalikas explained his odds and what it means for the bout to take place in the Welterweight division.

“My opening line personally is going to -275 for Conor McGregor. The comeback on Donald Cerrone is going to be +215. I think that’s a fair spot. Lines have been floating around a little bit before the matchup was announced and all the rumors started circulating a little bit. There are sportsbooks out there that opened Conor around -160. I think that’s far too low,” said Nick.

Next, he explained what it means for the bout to take place in the UFC’s 170lb division. From his perspective, the extra weight won’t make much difference. Especially because of the long layoff from competition for McGregor.

I think the weight is ok and it’s not going to really matter too much. I don’t think at 170lbs it’s going to impact the fight too much,” Kalikas said.

How much do fans expect the lines to shift as we get closer to McGregor vs Cowboy? Let us know in the comments below.