Conor McGregor doesn’t seem too interested in a fight with Justin Gaethje.

“The Highlight” was overwhelmed by the constant pressure of Nurmagomedov and eventually taken down by “The Eagle” who mounted him and locked in the triangle choke to get the victory.

After the fight, Nurmagomedov announced his retirement from the sport which meant the lightweight title was vacant. And in a post-fight interview, Gaethje spoke of being ready to compete for the title again and was willing to fight McGregor if the Irishman wanted to fight him instead of his planned January 23 opponent in Dustin Poirier.

McGregor, however, doesn’t seem reciprocative to the idea.

Responding to Gaethje’s interview in a now-deleted tweet, the former two-weight champion criticized his performance.

“Dustin KO’d you, as well as your wrestling/grappling and overall fear of the central positions being truly embarrassing tonight, Justin.” 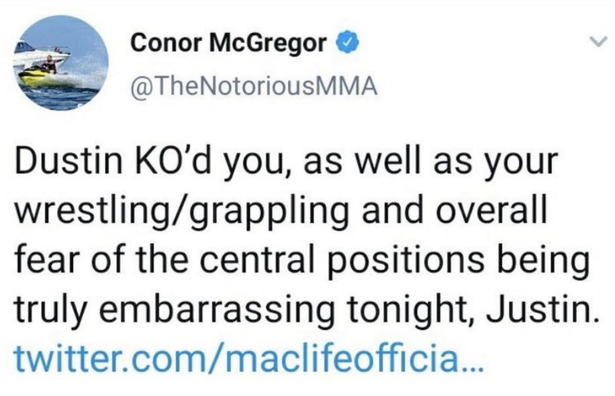 As for who would challenge for the lightweight title next, it remains to be seen.

When UFC president Dana White was asked in the post-fight press conference if the McGregor vs. Poirier bout would be for the vacant title, the UFC head honcho said he had no idea and wasn’t thinking about it for now.

However, the signs certainly look good for McGregor to become a two-time lightweight champion.