Conor McGregor is back to firing shots at people on social media. In his latest attempt, McGregor tweeted towards Daniel Cormier. However, he deleted the post before it caught steam.

Since losing to Dustin Poirier for a second time at UFC 264, McGregor has become more vocal about his disdain for Dustin. However, it also appears that McGregor has taken his words too far after disturbing tweets that eluded the passing of Khabib’s father.

Cormier stated that the tweets of McGregor were a cry for help. Furthermore, he should focus on the lightweight division, as it looks like the elite fighters have passed him in skill.

That’s when McGregor took to Twitter to lash out at Cormier for his analysis. Shortly after, Conor deleted the tweets. However, with screenshot technology, the tweet lives on. Thanks, G.

“Daniel Cormier is a fat mess. Getting into worse condition by the day. God bless him,” wrote McGregor. “Showing up drunk at media events the very day before he was in the booth calling my fight. Dat at a media event working? The day before being a commentator on the biggest fight in history?” 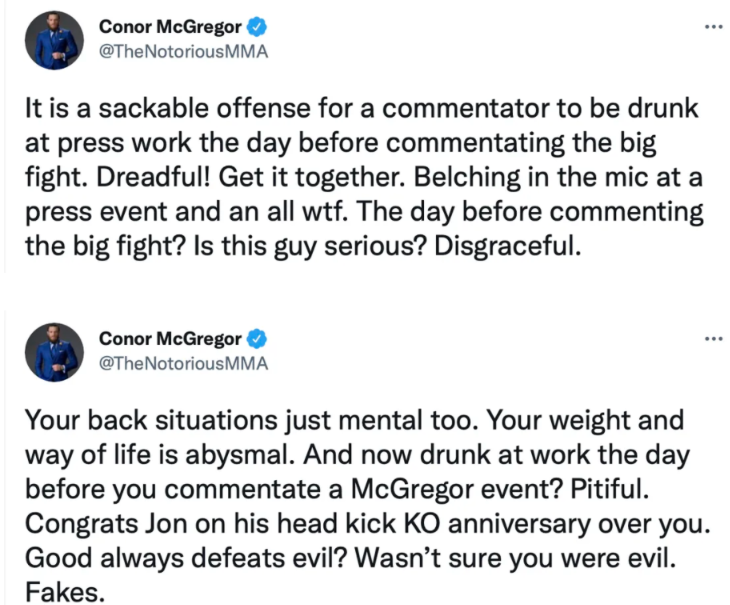 Since then, various media members have spoken out for Cormier to shed light on the incident. TSN Sports commentator shared that Cormier and Laura Sanko had a drinking contest for UFC Fight Pass, which was content produced by the UFC. However, he deleted his tweet as well.

Lmao why do y’all delete shit at this point pic.twitter.com/rWGybX6vjr

Shortly after, Sanko tweeted for clarification. She assured MMA fans that Cormier wasn’t drunk, which put McGregor’s comments to bed.

“I can assure everyone he wasn’t actually drunk. DC is a funny guy and he was having fun. He’s twice my size, we drank the same amount just as fast (well, almost lol) and I was fine. He was joking around. He’s a true professional on all levels.”