Markus Perez got into a fight last night, except it wasn’t with his fists. It was with a pillow.

Coming into 2022, we have all kinds of spectacles in combat sports. MMA champions fighting influencers, fighters competing in a triangular ring, and now we have professional ‘pillow fighting’.

Before you ask, yes, it’s a real thing. It’s hard to believe somebody made a sport stemming from childhood sleepovers. It’s even harder to believe former UFC fighters Markus Perez and Marcus Brimage are trying to put people to sleep under the ‘Pillow Fight Championship’ banner.

Perez, the UFC Middleweight veteran, would be released from his contract back in 2021. Since then, he’s been booking fights on the regional scene. He’s 1-1 after his UFC departure. That is, if you don’t count his pillow fighting debut.

The UFC’s ‘Joker’ would get a good laugh when he was offered to fight for PFC. Being the comedic man he is, he’d accept this new ‘challenge’. He’d face off against Reggie Newsome in his first pillow fight for the promotion. Believe it or not, they’d meet in a pay-per-view event on Saturday.

Surprisingly even in this league, things would turn ugly.

Who needs a #RoyalRumble ??? A clash of titans went nuclear during the mens tournament at PFC Pound Down on @FiteTV!!! pic.twitter.com/MPGZ2s9pSO

After minutes of swinging pillows at each other, Newsome would lose his pillow as it flew out of the ring. Perez would continue hitting him with a pillow. He’d hit him 4 times before backing off with a smile on his face. The pillow-less Newsome would take offense to that.

Newsome would walk up on Perez and push him. The two would clinch each other up and Perez would push Newsome into the ropes. The referee didn’t stop the altercation and people ringside would have to step in. They nearly fought for real. It took the people a few seconds to separate the athletes.

Perez and Newsome would continue to talk trash even when separated. More people dived into the ring to prevent more action from happening. 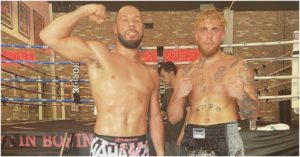 Markus Perez Explains Sparring Session with Jake Paul, Picks Ben Askren to Win: ‘He is Not a Fighter’