Mark Pavelich thinks you should name the new MFC cage

The MFC is headed to Windsor Ontario for their next event MFC 29 on April 8th 2011. I’ve spent a total of about five hours in Windsor, Canada. I should say I’ve been to the Windsor-Detroit Gateway. I never actually made it to Windsor that night thanks to the Royal Canadian Mounted Police. Myself and a few friends got in the car one night and decided to take an impromptu trip from Cleveland to Detroit and across the Canadian border to do a little drinking and gambling with some Canadian folk. Unfortunately, we never made it to gamble or drink that night because we appeared suspicious to these border patrol police. My car was torn to pieces during the Canadian police search for contraband and when they found what they were looking for we got thrown in seperate interrogation rooms where we were chastised and screamed at like they do to teenage hooligans in those ‘Scared Straight’ videos. The contraband was a small keychain container of pepper spray. Apparently, the police assumed we had plans to enter Windsor and destroy the city by releasing pepper spray into the eyes of innocent unsuspecting Canadian citizens.

After a five hour long stint in the Windsor Canadian Border Control Agency, we were not only banned by decree of the Queen from ever entering Canada again but we also learned exactly what a cavity search entails. Not really the most enjoyable way to learn you have a latex allergy. Ten years later and I still get flashbacks when I see those green latex gloves in the doctor’s office. Luckily, Mark Pavelich doesn’t have to cross any international border to get to Windsor. You might though if you enter and win the new MFC Cage Name Contest. 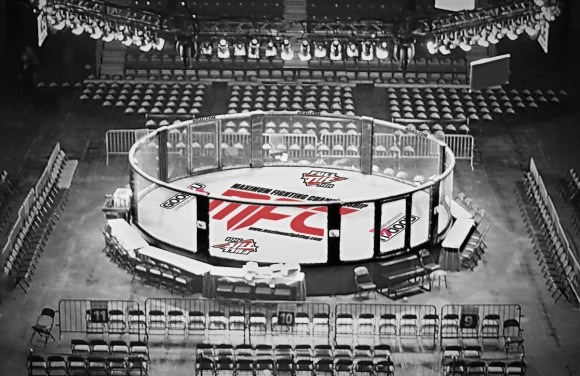 MFC is hosting their first ever event held in a cage and they want you to name it for them. In exchange for providing them with the winning insanely creative and witty name for their shiny new cage, they will provide you with premium tickets to the fights, airfare, ground transportation, hotel accommodations, pre-show and after-party passes. I personally would like name the cage Compton. that seems strange I’m sure so let me explain. Every time I see Mark Pavelich I can’t help but remember that statement he made last year regarding getting cut if you pull guard. Every time I think of that statement, the beat to the song Boyz in the hood by Eazy-E plays in my head and I hear this: “Cuz the boys in the hood don’t pull guard, you come with that mess we’ll pull your card.” Wow, that revelation was so deep you might think I was indulging in some Cherry Blend cigars and Mountain Dew ala Kid Khaos. Not the case though, Mark Pavelich is just that gangster.