For UFC on Fuel TV: Munoz vs. Weidman, ZUFFA provided the press row with a dinner of chicken parmesan, vegetable pasta and Cesar salad with croutons. For dessert, media was presented with a choice of strawberry cheesecake, regular cheesecake and standard wedding cake with a light vanilla frosting. The drinks served was a variety of hot teas, coffee, bottles of water and an assortment of soft drinks. At the post-fight press conference, cookies and small butter biscuits were served along with a bowl of tasty trail mix.

That would be the first paragraph of PressRowBuffet.com, a hypothetical site that I plan to create that would get me credentials to any sporting event under the condition that I’m able to cover the assortment of food they offer. That’s right, it’s not even about covering the sporting event. Give me the food — because that’s all I’m interested in. See you guys by the buffet line at next year’s Superbowl.

Right now, PressRowBuffet.con is simply a theoretical concept. However as of now, Mark Munoz’s face is really banged up. So mangled in fact that he’s even taken a picture of his newly acquired forehead scar and his temporary black eye Chris Weidman awarded him after last week’s UFC on Fuel TV. Check out what Munoz posted on his official site yesterday. 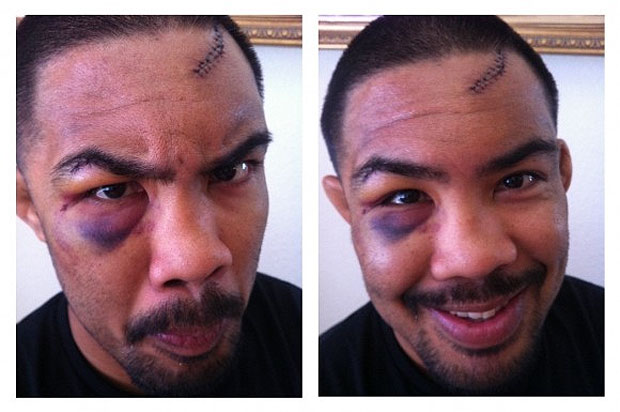 Rampage Jackson thinks Chael Sonnen 'sucks' and that he needs to leave the UFC
Read Next Post →
Click here to cancel reply.