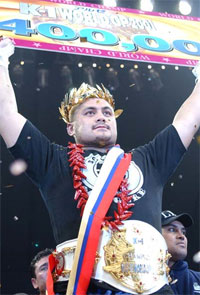 You can almost pinpoint the moment that our interview with Mark Hunt turned south. Specifically, it was when our interviewer asked ‘What type of Asian are you?’. It’s cool, our interviewer is Asian so he can ask those tough questions due to some double-standard racial technicality. Mark Hunt also has a blog in which he charges an astounding $97 membership just to read. In Sherdog’s interview with Mark, they didn’t pry into what’s hidden behind Hunt’s blog, but Jordan Breen did get him to admit that he gave up eating KFC and chocolate for his upcoming UFC debut.

“I just used up my time. I squandered it”

“I never had to make weight before. I never gave a damn what I ate. I’ve already stopped eating KFC, chocolate, that stuff. I’ve got a personal trainer, never had one of them before. I’m not a big person, I’m only 5-foot-10 or something.”

Bummer on the KFC Mark. We’ll eat one of those ridiculous Double Down KFC sandwiches in your honor (and then immediately force ourselves to vomit afterward). Ah, full-on Double Down! It even looks like a…Triple Down! [Source]