Mark Hunt: I Am Done With UFC They Treated Me Like Shit

UFC heavyweight Mark Hunt has been deemed physically fit to return to competition after all the fiasco of being brain damaged concern. Hunt will face Blaydes at a UFC 221 pay-per-view event scheduled for Feb. 11 in Perth, Australia.

Hunt has developed a reputation for being as fearless with his opinions as he is in the Octagon. Hunt has ripped into White multiple times over the past couple of years and always seems to be on the outs with the UFC over something, their relationship has always been love and hate at least on Hunt’s side.

Hunt is finally going to part ways with the UFC after he fights out his contract. He was recently speaking to Submission Radio.

“We’ll get that number nine [Curtis Blaydes] and put him away, so hopefully the UFC can give me someone higher instead of giving me someone beneath me. So, it is what it is. I just gotta keep ticking the boxes and just moving ahead with the career. Three fights left, this will be one of them, I got two left and then see you later. For the UFC, yeah. That will be the end of my career in the UFC [after I fight out of my contract]. I have two fights left and that’s it. You probably know the path I’ve had with the UFC, but you know, it’s business.”

“I haven’t done nothing wrong, I just don’t like to be treated like sh-t – even if I’m an employee or whatever and I speak my mind about it and, you know, I’ll go from there. So like I said, three fights left and I’ll move on. Well, of course I’m looking at going and fighting global fights for New Zealand, Australia and probably Japan. It depends on what happens. Like I said, I’m still chasing the dream of that world title. I’m in a good position to get a finish in this fight, beat this guy, then move on to the top end. It’s not gonna be easy, but I’ll see what happens and hopefully I get next in line for the world title shot, go from there. So, see what happens.”

Don’t get shocked; he isn’t retiring. He wants to fight globally with New Zealand, Australia and Japan. Being said, will we see Hunt in a RIZIN ring in a couple of years? Hunt has some historic fight record in Pride and K-1 and the winner of the 2001 K-1 World Grand Prix. 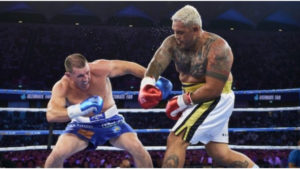 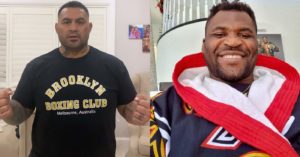 Mark Hunt To Francis Ngannou: “Stop Living On Your Knees”

Mark Hunt Has Some Advice For Francis Ngannou: ‘I Always Told UFC They Need To Pay Me’ 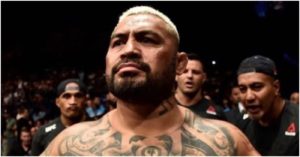 Mark Hunt Denies He Owes The UFC Over $375K, Wants To Fight Dana White And The Fertitta Brothers