Mariusz Pudzianowski made six-figures in his Moosin debut 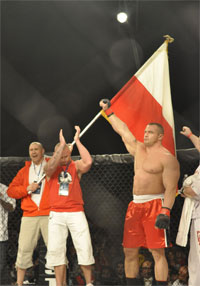 The myth of The World’s Strongest Man may have died in some of you after Mariusz Pudzianowski tapped to strikes in the second round from Tim Sylvia, but just remember even Brock Lesnar has a legitimate L on his record. When Krzysztof Kosedowski, Mariusz Pudzianowski’s boxing coach, called Pudz’s boxing ‘bad’, he didn’t mean it in the cool way that Michael Jackson used in order to have one of the most successful albums of all time. He literally meant Pudzianowski had perhaps the worst boxing he’s ever seen from an MMA fighter. This still did not prevent Mariusz Pudzianowski from making over twice as much than his opponent at Moosin: God of Martial Arts. Leave it to the Boston Herald to dig up the monetary dirt on the Moosin salaries.

According to Mariusz Pudzianowski’s Wikipedia entry, dude is also a green belt at Kyokushin Karate which is the same stuff Katsunori Kikuno uses to crescent kick his way through the lightweight ranks. The real question here is if Kikuno got in the cage with Pudzianowski, who would win? [Source]