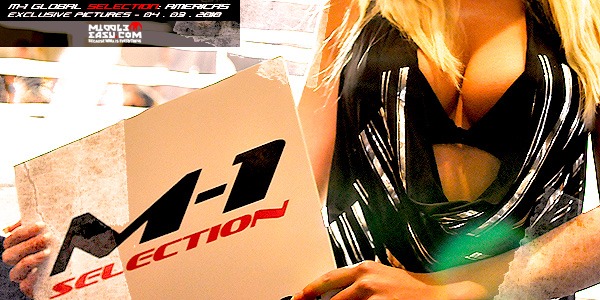 Yesterday started out like most other events for me. I got to Atlantic City, NJ the night before in the back of a friend’s car, dropped my stuff off at the hotel and proceeded to look for a TV with HDNet so I could watch the K-1 GP. Shoutout to Comcast for obliterating those aspirations across the entire AC strip (an even bigger shoutout to RCN Cable for discontinuing my HDNet so I came home to an empty DVR). I’m not much of a drinker (or a gambler), but not being able to watch Badr Hari live is pretty much forced me into a drinking/gambling oblivion until I woke up twitching on the floor of my hotel room, bewildered how I got there. At least I somehow made it home…and I still had my wallet. That in itself is always a win.

As for the fights themselves? After the end of the first round of the opening fight, my Blackberry exploded with text messages and tweets that looked like all my contacts just mashed their keyboards with punctuation marks to accentuate how fine they thought the M-1 ring girl was. I didn’t even see her yet because I was busy reading your tweets about how friggin amazing she was. Most people started hitting the buffet hard during the fights, but they all gave Yelena their full attention when she picked up her scorecard in-between rounds. Smart move by Jerry Millen right there (consider this your high-five). The consensus throughout the night was that if you ended your fight by knockout, you’d get boo’d for ruining our chance to see her do ‘her thing’ into the later rounds. It marked the first time in the history of MMA that a crowd unilaterally begged for fights to end by decision, just so they could see her hold up those round-cards and walk in circles. I feel like it’s only right we open with a gallery of Yelena pictures.

After every man who brought a wife/girlfriend got smacked repeatedly (and my girlfriend threatened to stab me with a trident if I didn’t start aiming my camera at the fighters), I started doing my job. The roster consisted of many notable strikers from various disciplines including World Muay-Thai Champion Rami Ibrahim representing Sitan Gym in Philly. Although he couldn’t pull out the win, Rami and the rest of the fighters on the card all put on a hell of a show. Watching people transition into MMA from their various professional combat backgrounds is oftentimes more exciting than the seasoned veterans. It’s like a throwback to the old days when MMA meant two well-conditioned athletes offering up one fighting-style vs. another. Gassing out wasn’t an issue at any point in the evening and neither were any of these guys’ ability to let their explosive hands fly. That being said, those with the most solid BJJ seemed to reign supreme as several fights (including the main event) ended by guillotine and rear naked choke.

In a Jerry Springeresque final thought… M-1’s audition video-sensation Shawn Obasi was in attendance (with a knee injury) and even he gave this M-1 Selection props for putting together a solid fightcard. After his audition video went viral in the online MMA community, he was invited to sit a few rows from the ring and spectate. It’s nice to know there are no hard feelings between M-1 and the now infamous Wing Chun practitioner. He might even end up on a future selection card which would surely keep us all tuned-in.

Thanks to M-1 Global for a raw night of MMA. “Until next time, take care of yourselves, and each other.”