Lorenzo Fertitta wrote a letter to congress supporting SOPA, and we have it right here

Before everyone starts their ‘Dude, WTF’ threads across MMA message boards, let me give you a brief rundown of what I believe Lorenzo Fertitta was thinking when he wrote this letter to Congressman Lamar Smith in support of the SOPA act that we at MiddleEasy are vehemently against.

Over the last decade, we witnessed online piracy literally dismantle the music industry. With the advent of Napster, college kids choked the bandwidth of their dorms downloading overrated albums from artists like ‘Ben Folds Five.’ Admit it, we all did. Granted, it’s tough to consider it ‘stealing’ when the items we took weren’t even tangible. The music industry knew sales were in a massive decline, so they did what any industry would do if they had a seemingly endless amount of money and K-1 level lawyers — attack the people that were engaging in peer-to-peer sharing. Little old ladies were being detained by the FBI, kids across America were being arrested after school for ‘stealing’ — it was just a giant mess. However, the detainment of citizens across the country only inspired more people to illegally download content and sparked a surge in new P2P technologies. The ‘iron fist’ approach backfired for the music industry, and they realized their approach must change. Production companies begin working with internet-based companies to deliver their product to the people that would normally just jack it from the internet. Those people were now presented with a method to digitally download music legally (and at a higher quality), and we saw entities like the ‘iTune store’ become a common staple in Western culture.

In the past, ZUFFA has attacked (and continues to attack) websites established for the sole purpose of broadcasting live UFC events which undeniably undercuts revenue that could have been earned during the show. No one should be surprised by this. UFC operates on primarily a PPV business model with most of their undisclosed income coming from cable/satellite providers at a moderately priced rate. Without revenue accumulated from this model, the UFC would be a local Las Vegas promotion with an extreme obsession with geometrical shapes. A multitude of unnamed websites have been established across the net to give viewers free and illegal access to live UFC events while having the audacity to spam their sites with ads — essentially making money off a product they stole.

Pretend like you don’t have an annoying girlfriend and the lock on your car door works. Put yourself in Lorenzo Fertitta’s shoes, a guy that literally resurrected a company on life support, burned through an unimaginable amount of money and finally made the company into what you see today. Now imagine a few rogue sites dipping in your pockets and removing potential money that could have been created from a live UFC event. Sure it affects you (remember, you’re Lorenzo Fertitta in this example), but what about the entire underlying structure of the UFC? Fighter payouts (and bonuses) are lower. With less money, the overall production of UFC events are marginal at best. People will lose interest in a declining product and the sport we love will lose relevancy in the US. There would be no FOX deals. MMA fans would go through a steady bout of depression and eventually focus their energy in appreciating the fine aspects of rodeo as a sport.

By embracing Xbox 360 (and UFC.com) as a medium to deliver their product, the UFC has accepted that most people prefer to watch live events through digital means. That option is now present for potential consumers, and as we’ve seen with the music industry, it’s a smart move. However, Mr. Lorenzo Fertitta, please stop supporting SOPA/PIPA or any variation of it from now until the sun kills the earth. We understood you’re against piracy, and it makes complete sense that you are. But SOPA being the solution to stop piracy is like performing brain surgery with a medieval flail. It puts the fear of Dana White into rogue sites that stream UFC events, but it simultaneously robs the American people of our constitutional rights. SOPA is censorship. It’s a freedom suppressor with the ability to completely remove entire domains from being accessed by everyone in the United States — communist China style.

You know all of those slick YouTube highlight films created by phenomenal editors across the world which are aimed at increasing interest in the UFC product? Under SOPA, any site that posts these highlight videos (including MiddleEasy, The Underground, CagePotato and every other MMA message board you could think of) would be completely removed from the internet. We’re not talking about a few pages being deleted from the site. Not at all. SOPA would have the power to censor an entire domain name.

I can only assume what was going through Lorenzo Fertitta’s mind when he wrote this letter. He wanted to protect the interest of the UFC, but I’m assuming he wasn’t aware of the severe ramifications that SOPA could have instituted on the American people (and the world). Based on that logic, Lorenzo Fertitta should get a pass on this one — however, I could be completely wrong. Perhaps you should call me up, Lorenzo. Give MiddleEasy an exclusive interview on your stance on SOPA. I’m sure you can get my number from ZUFFA and I’m absolutely certain MMA fans that have supported the UFC for years would love to hear your stance.

Now check out Lorenzo Fertitta’s letter that was sent to Lamar Smith, the chief sponsor of SOPA, which expressed the UFC’s support of SOPA/PIPA. Oh, and to the readers out there — you’re not Lorenzo Fertitta anymore. That ended a few paragraphs ago. Now stop putting a down payment on the new Bugatti Grand Sport with money you no longer have. Sorry. 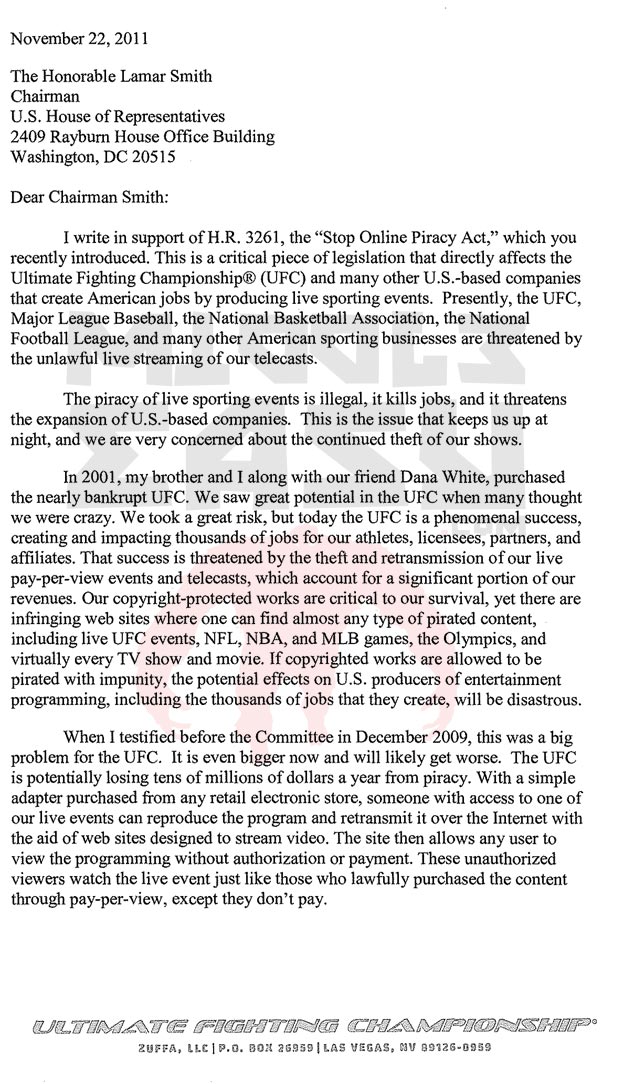 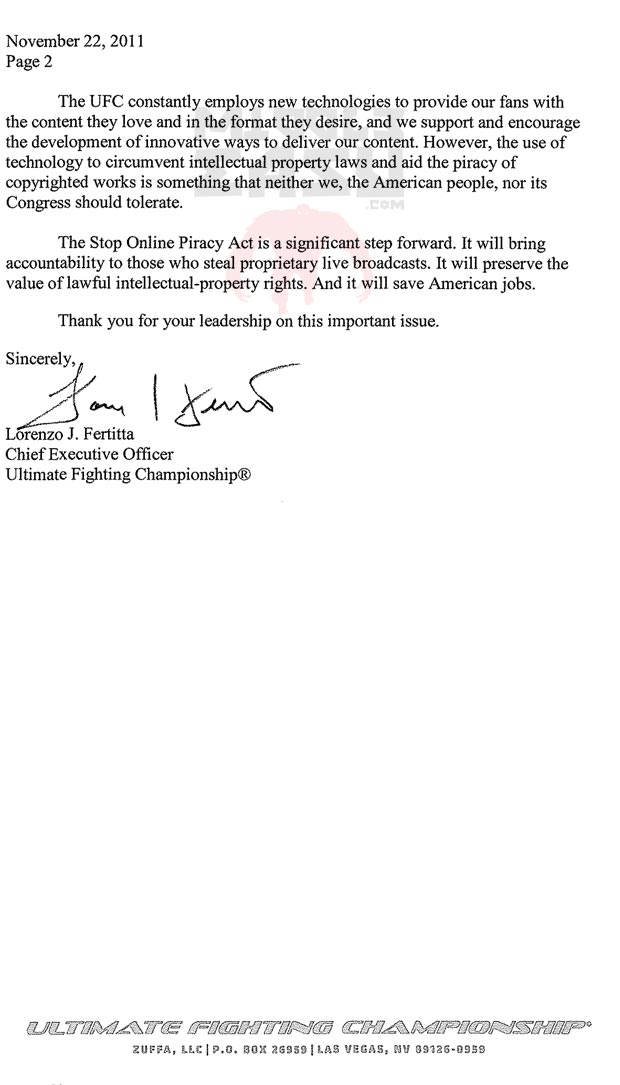 Sorry, Jon Jones is not impressed with your lame jokes
← Read Last Post