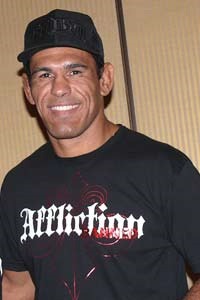 If you go to a bar and try to order a Lil Nog in the summer, the bartender will kindly inform you that they’re fresh out. He may even offer you some orange juice or ask you to leave depending on what part of town you’re in. No matter how misplaced your loyalties are to any establishment, the appropriate response is always ‘Pfft… I’ve been kicked out of nicer places than this’. That’s a way to remind your server that you’re somehow entitled, and if he would just pour you a glass of what you initially asked for, this whole altercation could have been easily averted. Everyone should keep a Lil Nog around at all times, just like Anderson Silva does.

UFC 117 is rapidly approaching, and although we’ve already seen Chael Sonnen’s ability to derail the stability of nuclear research facilities with his smack talk, Ed Soares’ camp has been slow to respond with verbal retorts of their own. Maybe Anderson’s English isn’t as advanced as Chael says it is, or maybe Steven Seagal is actually teaching Ando how to talk with his fists in a literal way. Whatever the case, here’s how Lil Nog feels about Chael and his upcoming fight with the Spider:

“I think he’s just talking nonsense,” Rogerio said in an interview conducted in June. “He is not even a real challenger to Anderson. I think other fighters have done much more in the division, such as Dan Henderson, Nate Marquardt, whom he won against, Demian Maia, who played with him like a child, and Vitor Belfort. He is enjoying his 15 minutes of fame. He will take a beating from Anderson, who will beat him like a child, will beat his ass and will shut his mouth.”

“He knows Anderson will beat him and he is enjoying his 15 minutes of fame, knowing that it will end,” Rogerio said. “He has no qualifications to compete for the belt — that’s the truth. He doesn’t have good boxing or ground, only good wrestling.”

Despite your true feelings about Chael Sonnen, it’s important to note that he’s never lost at middleweight and holds the only win over Paulo Filho, who’s still regarded as one of the best BJJ practitioners in the world. UFC 117 goes down exactly one month from today and if the fight materializes into a five round ground battle, we certainly hope that Anderson doesn’t compromise Chael’s loyalty to the Republican party. [Source]