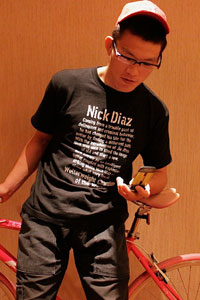 I feel like Shinya Aoki’s pants are much like Jackie Chan’s tuxedo in the movie (appropriately titled] “The Tuxedo.” If they ever made a movie called “The Rainbow Pants”, and it wasn’t somehow affiliated with San Fransico independent filmmakers, it would cause the wearer of said pants to go on an unstoppable submission-grappling rampage across lightweight divisions of Japanese MMA. The world would not be able to prepare for the rise in demand for rainbow pants, and with a few changes, this woman would have an easier time getting her career started.

Future star of said movie and Japanese fan favorite Shinya Aoki was slated to fight Yokthai Sithoar (best name for a videogame character, ever), a respected boxing champion but MMA newcomer this past weekend at DEEP 50: Impact. I know what you may be thinking, “What organization would honestly make a highlight fight out of a world-renowned grappling sensation versus a boxer with no MMA experience whatsoever?” It almost seemed irrelevant until Sithoar redeemed himself saying “He’ll be working on his takedown defense and hope to catch Aoki with a one-punch KO.” That sounds promising, yet original enough for a two-month media blitz.

Oddly enough, and in only one minute, Aoki snared a takedown, locked in a reverse-triangle from mount, and in the smorgasbord of submission opportunities available, decided an Americana would be his 26th MMA win. [Source]