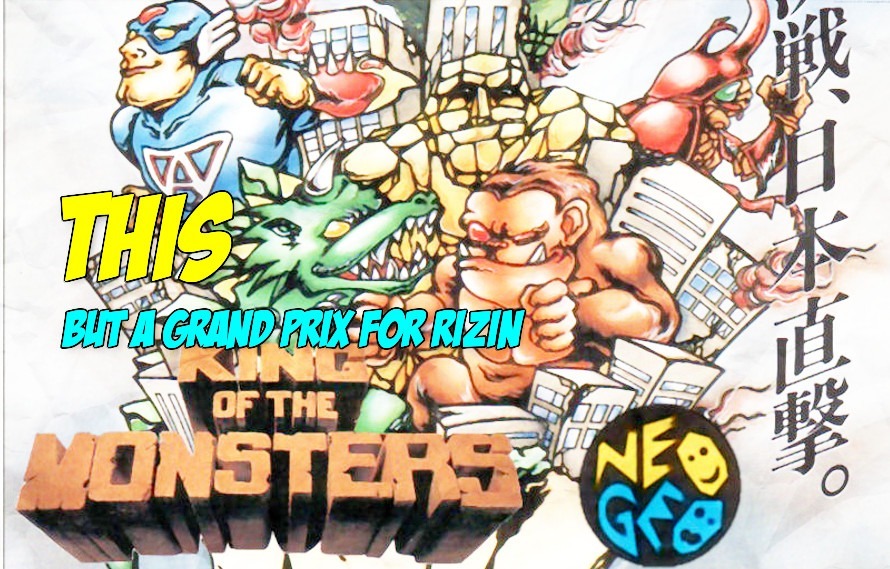 Japan. The history of fighting is rich in this country. So many legendary fights has taken place here. The PRIDE & K-1 days are considered by many to be the peak of combat sports. Kimura, Takada, Rickson, Sakuraba, Hoost, Aerts, Fedor, the list goes on and on. The Japanese fans love the display of Bushido, the spirit of the warrior, where two men push each other to the very limit……But you know what else the Japanese fans love ??? BIG MEN !!!

Dudes that look like giants compared to the rest of mankind. And that’s our topic. 10 years ago, a Japanese MMA promotion called DEEP, came up with the idea of the Megaton GP, which is basically the largest fighters they could find, put in one ring, and let them square off until only one was left breathing, I mean standing. Today, we try to recreate this genius concept. Let’s do this!

The fan favorite, beloved big man has arguably made quite an impression in his short time in MMA. Having fought only 4 times but each fight was against a legend in Japan. Of course his fame started during his sumo days where he won numerous championships and became one of the most accomplished gaijins (foreigners) in sumo wrestling. His size (and gigantic belly) will play a huge factor in this GP. Imagine this guy fall on top of you…..Yikes !

A 5-time World’s Strongest Man and 16-time Strongman Super Series winner, Mariusz is certainly Poland’s favorite son. Every time this monster of a man shows his face in the ring or cage, it’s a guaranteed sell out. One of KSW’s main attractions, Pudzilla is being adored by the Polish fans, as a national hero. His gameplan: BE STRONGER THAN YOUR OPPONENT ! I mean, seriously. He has out-grappled Judo Olympic winner Pawel Nastula just with his natural strength. Always powering forward, punching and leg kicking his foes, until he either knocks them out cold or runs out of fume. No matter what, he is a force to be reckoned with.

The current DEEP Megaton champion. The man from Guam initially made his name in Pacific X-treme Combat, where he held their Heavyweight title, and eventually came over to the land of the Rising Sun. Most recently appeared for RIZIN against kickboxing icon Jerome Le Banner, making short work of the veteran after making him tap out to a scarf hold. Maybe this tournament’s underdog but certainly not someone that will disappoint.

Born and raised in China, the Heavyweight Supernova is ROAD FC’s big, really big, super duper chubby babyface ! The South Korean promotion has become known for booking husky (to put it politely), but this specific man has earned the love of the Korean people for simply beating people up and looking adorable while doing it. If his punches won’t do the trick, then his overwhelming cuteness will definitely make his opponents give up.

Fun fact: His is a hell of a dancer !

Aorigele performs a little dance and then proceeds to knock out Bob Sapp. What a guy ! pic.twitter.com/QoR39S9BdH

Also known as the Huggy Bear, Barnett was put on this Earth to spread joy and happiness to all of us. He is the living personification of Kung Fu Panda ! How many 285 pounders do you know that can execute perfectly a spinning kick ??? I dare you to find me one ! His style and charisma made him an attraction in Japan, starting his career there at Inoki’s IGF federation, knocking out the man with one of the biggest MMA records in history, Travis Wiuff, in his 91st fight ! Win or lose, the Huggy Bear is a treat to watch.

Fun fact: He is an even better dancer than Aorigele !

Talking about a veteran, Mo has been a boxer, a kickboxer and a mma fighter, competing in some of the biggest stages: K-1, Bellator, DREAM. Despite his many defeats he has won a lot of titles through out his career including two K-1 tournaments and he is currently the ROAD FC Openweight champion. This Samoan ain’t someone to mess with.

The original Megaton King. The “Crusher” won the first and only in history Megaton GP and became the DEEP Megaton champion in the process, defending the title for a record of three times, including a defense over Roque Martinez. An international competitor, having fought numerous times outside of Japan, which is rare for many Japanese fighters, in places like Poland, Sweeden, the Netherlands, Australia and most recently in China.

The Crasher destroys another one pic.twitter.com/2X0b1ZIRR8

Speaking of pro-wrestling…….Hey, this is Japan after all. It wouldn’t be a GP without one pro-wrestler. And who better than a SUMO WRESTLER ! That’s right, Baruto ain’t the heavier lad in this tournament. 451 pounds of beef, holy smokes ! Hama earned the rank of Hakushita, the third highest division in sumo, before turning into puroresu, where he won All Japan’s major title in 17 months only into the game. Who says he can’t do it again in MMA ? Life is full of surprises.

And that’s it folks ! Who do you think wins ? Who will go home with an infinite supply of noodles and donuts for the rest of their lives ? Let you imagination run wild and have fun !

If you want to find me on twitter, my name is @Delisketo.

Video: Arianny Celeste turns her back on MMA, says Mayweather has a shot vs. McGregor in the UFC
Read Next Post →
Click here to cancel reply.