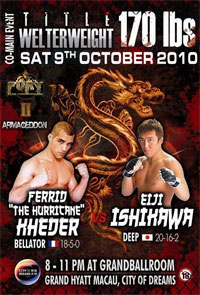 I always LOL when people use the word ’embezzlement’. I mean really, let’s just call it what it is — theft. It’s stealing money that isn’t yours. The only difference in theft and embezzlement is where you end up serving time for it and who your potential cellies might be. Steal someone’s visa card and go on a shopping spree at Costco buying up their entire shelf of Heinekens, frozen chicken wings, and an industrial sized jug of Frank’s Red Hot Sauce for Strikeforce this weekend and you will probably go to the local county jail and spend some time in a cell with a toothless guy named Chester who is planning where to set up his next meth lab when he gets out. On the other hand, embezzle some money from a major corporation while wearing a suit and tie and you’re going to a cushy federal prison to hang with some former Enron executives reading the Wall Street Journal and sipping on Starbucks. Looks like embezzlement is usually the way to go, if you are into theivery and that sort of stuff.

Not this time though, according to a report by Robert Sargent on MMArising.com, this guy Damien Roche has allegedly embezzled a major haul of Hong Kongian cash and is now hiding out. Roche is the promoter of the Fury 2 fights scheduled for this saturday in Macau and is a former director of Kontact MMMA Training Center in Hong Kong. According to MMArising.com, the venue set to host the event canceled it when they found out Roche had yanked $600,000 from them.

That’s not where it ends though. Apparently Roche was also recently fired from Kombat MMA Training Center when they found he had embezzled nearly $12 million from them! That’s a submarine load of cash, folks. As if that wasn’t bad enough, the fighters who arrived in Macau found the event canceled, their hotel rooms canceled and their return flights were canceled as well. So Roche not only allegedly took Kombat’s cash, but also the money that would have paid for the fighters hotels and flights.

Some of the fighters have been able to find other ways to get home, while others are still stranded in Macau. That’s pretty insane. I didn’t even know where Macau was at until I Google-mapped it. Well for you fellow geographically ignorant folks — it’s in China, and thanks to Wikipedia I now know that Macau reps the highest life expectancy in the world. There, now you can’t say you’ve never learned anything by reading Middleeasy.com.

I’d say normally, if you had to do a crime, that embezzlement would be the way to go. But in this case, if you are Damien Roche and you’ve allegedly left a handful of human beings who break faces and arms and legs for a living and have the skills to choke the life out of you without hardly breaking a sweat without anywhere to stay or a way back home…not so smart. I would be more worried about an extremely disgruntled Carinna Damm or Jess Lauidin hosting a manhunt for me than some International version of America’s Most Wanted. [Source]