Some people say Cannibal Holocaust is the goriest movie ever (and most disturbing). Those people could be right, and they could also be Italian horror film hipsters that will constantly remind you that the ‘lost footage format’ made popular by The Blair Witch Project and later that movie that was essentially Godzilla with a handicam was actually started by Cannibal Holocaust. They are correct in that belief. I was always an Ichi the Killer fan myself, or if I couldn’t enjoy Japanese underground gore cinema I would just turn to the old Tom Savini classics like the original Friday the 13th, Dawn/Day of the Dead and on and on to get my kicks.

Now I don’t have to turn to the golden age of gore-cinema to contemplate the juices that run our bodies; I will have May 26th – one of the goriest nights in MMA history. Duane Ludwig had a crater placed in his skull by Dan Hardy, Bigfoot Silva spurted his own blood all over the octagon, Shane Del Rosario had two wombs about to give birth placed on his eyebrow and then in Texas Gracie Fighter Chris Quitiquit had this pleasant scratch placed upon his dome.

The doctor stopped the fight from the cut that we’re told came from a grazing knee while Quitiquit was in control of the fight. That sucks, but Miguel Torres will definitely give you a fist bump the next time he sees you, Chris. 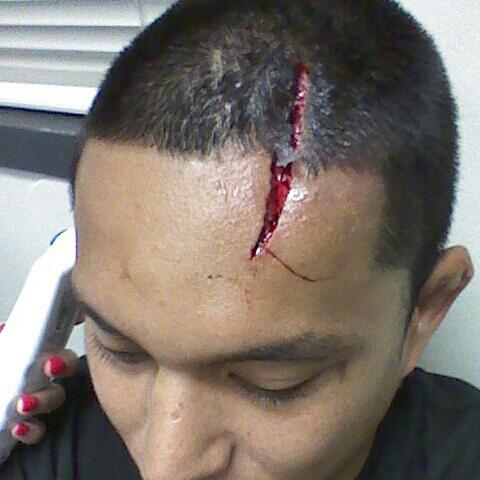 Fun Jason fact: I used this old Tom Savini slashed wrist effect on my last day at a retail job and almost got arrested for it.