Sports Illustrated’s Loretta Hunt and I attended the E3 Expo last week in an attempt to create the most unexpected crew in sports history. Unfortunately, that skinny fight analyst dude from Poland missed his flight from Europe, so we were the only ones that could attend. If you’ve never been to E3, it’s sort of like what you expect if every arcade and console from across the planet had a massive, condomless orgy and nine months later all the offspring set up shop in the Los Angeles Convention Center. If you think you can just stroll around the expo and view any upcoming game then you’re wrong. Actually, E3 is a great place to go if you want stand in line for 45 minutes to gain entry into a small room so you can watch some programmer play a half-finished game. At least that’s what most of E3 consists of. 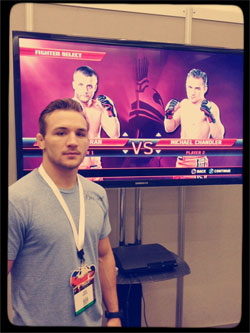 When we arrived at the expo, 345 Games and Bellator escorted us directly to their booth, which was next to a few guys giving away fully-smoked turkey legs disguised as severed limbs to promote a new zombie horror game. Now that’s innovation. Michael Chandler was inside the booth and we talked about his ridiculously insane fight with Eddie Alvarez. I told him that it was somewhat of a bummer that one of the greatest fights in 2011 was overshadowed by perhaps the greatest fight of 2011, UFC 138: Shogun vs. Hendo which aired simultaneously. After we professed over how much we love each others’ work, it was time for us to pick up a controller and get down to business.

Alright, let me just get all the bad stuff out of the way before crazed rioters burn down my apartment from celebrating the LA Kings winning the Stanley Cup tonight. Despite Bellator having one the deepest female rosters in MMA, women are not in the new Bellator game. I asked the developer if the company plans to release downloadable content in the future, and his answer wasn’t that convincing. This was somewhat unexpected since 345 Games/Kung Fu Factory are responsible for creating Supremacy MMA, the first MMA game to feature female fighters. Also, there is no interactive tournament mode in the game. You can’t get your buds together and replicate your very own Bellator tournament, although when I brought up the idea, Michael Chandler seemed to be intrigued by the concept. There’s another thing that I unfortunately have to tell you guys, and it sucks that I’m even placed in this position — but there’s no Eddie Alvarez. Yeah, that’s like NBA Action 1995 not having Shaquille O’Neal and replacing him with Tree Rollins. Now, on to the good stuff.

This game plays much smoother than Supremacy MMA. Perhaps it’s Kung Fu Factory removing all the unnecessary gore from their Supremacy MMA model, but ‘Bellator Onslaught’ feels more like a sports game and less like a platform. I also want to let the world know that I used Marlon Sandro to defeat Michael Chandler while he played as himself. He got pretty angry, and granted, that’s a highly unrealistic scenario. I mostly sprinkled lower leg kicks to thwart Chandler’s offensive, then craftily backed up as he tried to go for a takedown. In Bellator Onslaught, face buttons are used as your striking offensive, your standard top buttons are for high punch/kick, and the lower buttons are for your low punch/kick. What’s interesting in the game is the status bar just below your health, which is critical in not getting unexpectedly knocked out. Each time you throw a punch or engage in offense, your ‘stamina’ bar drains a little. Of course, if you just back up and rest, it quickly replenishes. However, if you’re a button masher that relies on an endless supply of combos, you’re going to get dominated in this game. Once your stamina bar approaches the end, your fighter is prone to what’s called a ‘flash KO.’ Essentially, if your opponent connects when your stamina is depleted, a slow-motion strike will occur, effectively knocking you out with one punch/kick. Fortunately, one of the developers in the 345 Games booth told me about this before I finished my Killer Instinct ‘Ultra Combo’ on Chandler’s face, so I had just enough time to back off and let my character rest. One of the developers insisted on telling me Marlon Sandro was good at submissions and tried to teach me how to engage when on the ground, but I told him that he needed to watch more Sengoku since four out of Sandro’s five wins were from a stunning knockout. Sure I should have listened, but I was intent on knocking out the Bellator lightweight champion and raising my hands in pure elation. Seconds later, Chandler went in for the double-leg and I caught him with a well-timed uppercut, quickly destroying whatever consciousness his digital representation had. It was like Sandro vs. Kanehara all over again, except our bout lasted longer than thirty-eight seconds.

My final verdict is it’s impossible to call yourself an MMA fan and refuse to buy this game. It’s $15 dollars. There’s no reason why you can’t afford that minor amount of cash for countless hours of standing on your sofa, screaming ‘Oh [expletive] did you see that knockout?!’ Bellator Onslaught will be available on both Xbox Live and the Playstation Network later this Summer. It will also be one of the first Xbox Live games to offer 400 achievement points, including one achievement if you can defeat your opponent in a ranked match in less than 20 seconds.

Check out the ‘Combat Walkthrough’ GameTrailers filmed during last week’s E3 Expo for another look at the upcoming game.

Mark Munoz says Hector Lombard needs to 'earn his stripes' before getting a title shot in UFC
Read Next Post →
Click here to cancel reply.