Leon Edwards On His ‘Surreal Moment’ at UFC 278; ‘I Will Treasure Forever’

Leon Edwards shocked the world on Saturday night when he delivered a picture-perfect head kick that knocked out former welterweight world champion Kamaru Usman with less than one minute to go in their UFC 278 world title clash.

It was an epic moment that had fans around the world buzzing. Mere seconds away from certain defeat, ‘Rocky’ scored what many believe is the greatest head kick KO in UFC history. Given the stakes and the ramifications, it’s easy to see why Leon Edwards’ kick heard around the world is already getting its own ‘GOAT’ status.

Following his insane come-from-behind victory, Leon Edwards appeared on ‘The MMA Hour’ with Ariel Helwani. With a noticeably hoarse voice as a result of all the celebrating he’s done since Saturday night, ‘Rocky’ was asked how it feels to be a UFC world champion.

“Everyone keeps asking me that, how does it feel. It’s hard to put into words. It’s like in my post-fight interview, I’ll just start crying because it’s hard not to. Just the moment of winning a UFC world championship and getting to that point, to achieve my dream and go through all the ups and down throughout life and throughout my career. It’s still difficult to put into words.”

In the opening round of their UFC 278 clash, Leon Edwards shocked fans when he managed to finish the round in a dominant position.

“I knew he would have been difficult to choke out, but I knew once I got on top of him, my ground game is way better than his ground game as far as jiu-jitsu. He’s a wrestler. He prefers to be on top so once I got on top, I knew I’d be able to dominate the grappling part.

“In the first round I felt normal, but after that my body just kind of shut down on me.”

Edwards’ demeanor changed following the first round as the fighter was unable to find much offense in the next 15 minutes. ‘Rocky’ was noticeably dejected sitting on the stool in between rounds with his cornerman screaming in his ear, reminiscent of Mickey Goldmill, the trainer of fictionalized boxing icon Rocky Balboa.

When asked if he had any sense of panic after being unable to repeat his first-round performance in the subsequent rounds, ‘Rocky’ confirmed that he was worried about letting the opportunity slip away.

“I was getting worried for sure. 100 percent. The moment was big for me and it was just my luck for that to happen. Like, no way can this happen. I said it all week that I feel like this is my moment and there’s no way. God brought me to this point to let this happen like that. That sort of kept playing in my head. There’s no way I came here to let it go to a decision and finish like this.”

With less than a minute left in the fight, fans were counting down the seconds of what seemed to be a surefire decision victory for ‘The Nigerian Nightmare.’ And then it happened. Leon Edwards feinted a jab prompting Kamaru Usman to respond, then delivered a cross-head kick that landed clean, instantly knocking out the world champion and sending fans in attendance and those watching at home in an absolutely frenzy.

Dave Lovell…perhaps I should call you before my next workout you f*cking legend!

Courtesy of @SeeUSoonBoyy, here is some of Leon Edwards’ corner advice before the headkick KO w/ Rocky music edit:pic.twitter.com/2mMVOxPjXS @Leon_edwardsmma

“I didn’t feel it land. I just remember as my leg is coming back I see him fall. I thought, ‘oh no, I’ve got ya.’ Was ready for the ground and pound, but Herb (Dean) jumped in and his (Kamaru) eyes were rolling. I thought, ‘it’s done after that.’ Then the emotions overtook me. It’s hard to put into words. Everyone keeps asking me to put it into words. It’s difficult.

“I’ve never cried from happiness before so when I cry from happiness, that’s how I knew it was for real. It was such a surreal moment and a moment I will treasure forever. To think I didn’t even know where Utah was and now Utah is stuck in my life forever. It’s an amazing story.”

The likeliest scenario is Edwards defending his title in a rematch with ‘The Nigerian Nightmare’ in early 2023 as Dana White confirmed the promotion is already booked through January. Speaking about the potential rematch, the UFC President seems to be keen on the idea of taking it to Edwards’ home country of England and the historic Wembley Stadium.

Until the inevitable rematch goes down, highlights of Leon Edwards’ historic head kick knockout will certainly be rewound, re-watched, and relived over and over again. 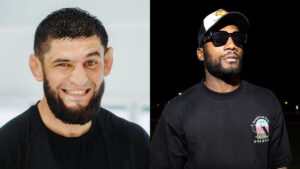