Halloween weekend in Vegas is not for the faint of heart. Generally you will find the strip filled with all manner of creatures year round, but on the eve of UFC 137 a different breed of drunken party goer stalked the neon lit streets: zombies, sexy nurses, sexy nurse zombies and every other combination of sexy zombie cop/construction worker/stenographer you could imagine existed. My journey from Mandalay Bay to the posh Cosmopolitan hotel’s UFC 3 preview party a few blocks away felt like it was straight out of the porno version of The Walking Dead. Everywhere my lovely assistant and I turned we were met with the busty undead. We hustled hand in hand down the strip as we dodged the ghouls expertly and made our way into the hotel. Inside the Cosmopolitan was very, very swanky. It looked like it was designed by a huge fan of Lucy in the Skies with Diamonds, literally everything glittered. We wound our way through the roulette tables as things eventually started getting a lot less ‘Halloweeny’, and we checked in upstairs. A quick debriefing and a handshake nondisclosure agreement later and we were ushered into an elevator with a large man in dark suit and taken up to an unknown floor. 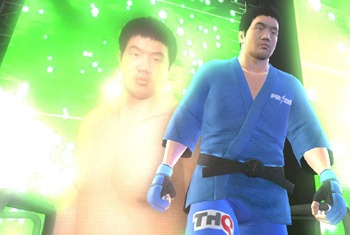 As soon as we stepped off the elevator a huge ice block greeted us with the words ‘PRIDE never dies’. That slogan was the motto of the night, it was plastered everywhere: the walls the table cloth, everywhere. It was like Bloodstaine Lane, Gary LaPlante and Liberace got a penthouse together. I cannot stress enough how unbelievable the place looked. Eventually we were greeted by LayzieTheSavage and Chuck Liddell at another huge UFC + PRIDE ice sculpture that was flowing with an alcoholic beverage called ‘headstomp’ or something. I honestly can’t remember, it could have been called knees to the dome from side control for all I know, bottom line this ice flow mystery drink was strong and delicious and that’s all that really matters. After talking to Chuck for a bit and watching Urijah Faber graze the catering table for a while, Layzie, my assistant (wife) and I sat down at one of the many console stations and jumped right into PRIDE mode.

First off Lenne Hardt is in the game and it’s awesome. The PRIDE production values are ridiculously spot on. You will have confetti swirling around you as you celebrate victory (or wallow in defeat) in the Saitima Super Arena. PRIDE’s home is represented along with a host of other real life locations (like Mandalay and the other usual suspects). Everything about UFC 3 screams ‘more‘. More licensed referees, more weight classes, more fighters, hell, more MMA organizations. You can tell that the extra time they took paid off in the presentation department, I felt like in was 2005 all over again. I must note that Layzie and I never left PRIDE mode and after a few scans of the room (although influenced by the soccer kick drink) I think literally every monitor had a PRIDE match going down. What can I say, the media loves it when one person kicks another person in the head.

The gameplay is both exactly what you expect and noticeably ‘better’. Refined might be the word. At first I picked up the controller after a year of EA MMA and was completely lost. I felt herky jerky and I was bummed/frustrated by the rock em sock em feel of the previous games still in this title’s DNA. But, after a few matches I was feinting, swaying and timing my punches to Layzie’s face with ease. Well, with somewhat ease. Layzie kept pulling guard over and over trying to submit me.
When I first saw the submission system in Undisputed 3 I thought it was going to be like EA MMA-this isn’t true. The submission system is actually a really fun and interesting battle of techniques. One player is just trying to hover over the other players cursor, you will see how Layzie submits me with ease when we first play in the video below, it’s because I didn’t know the controls and he wanted to humiliate me in front of my wife. That’s fine. Submission battles later in the night went back and forth and lasted upwards of a minute sometimes. It’s like faking a set up on the left then going right for the sub when you are grappling (see: many head and arm triangles in MMA). Overall, grappling and the submissions were very involved and fun. It should be mentioned that this year features ‘amateur’ controls that help make transitions easier for those who can’t quite pull off the quarter circles and Hadouken motions. It’s a simple UP and DOWN on the right analog. 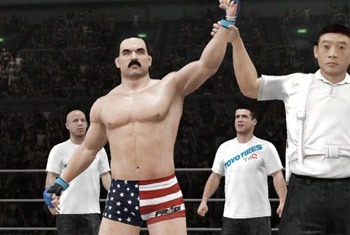 Striking is improved. It still feels a little ‘rock em sockem’, but the power behind your punches is much more realistic now. No longer will you take a strike to the face like Arnold in T2, shrugging off multiple overhands while staring your opponent in the eyes. Just like in a real fight you don’t want to get hit. Dodging/parrying is smoother, movement in the PRIDE ring felt awesome and the speed of the whole game felt like it was taken down a couple notches from the previous years. It was still faster than EA MMA, but once I had the controls down, my once 30 second slaughters at the hands of Layzie and Nate Diaz turned into bloody classics that almost went to a decision a few times. Speaking of the blood, it’s much more organic and a drastic improvement over the limited options available in 09 and 10. Eyes get puffy, noses get smashed, lips split and it’s all presented in a much more realistic manner.

By the time we were done with our tenth or so fight, I had finished multiple of the ‘knees to the head in the north/south position’ drinks and I had to leave before I started drunkenly getting in Joe Lauzon’s face about Battlefield 3 Vs. Call of Duty. I said goodbye to my rival Layzie for the time being and took a final look around the room. THQ has created a game that every fight fan is going to want to buy just for the licenses alone. Fighting in the white ring in the middle of the Saitama Super Arena as Lenne Hardt screams is something we have only experienced on a blocky last gen platform, but now we can relive PRIDE in a pixel perfect recreation. The game is sweet even at this incomplete stage and PRIDE indeed never dies…Just like those sexy zombies that were waiting for me downstairs.

Remember that Tank Abbott fight that was supposed to go down at a strip club? Well we have video of it...
← Read Last Post