Last night at UFC on FX, Eddie Wineland’s cut was so deep that you could see his thoughts

It’s hard to think when the thoughts that engulf your mind are being leaked on a mat due to a horrendous cut from Scott Jorgensen at UFC on FX: Johnson vs. McCall. The trap-door hidden on Eddie Wineland’s forehead was forcefully unlatched, spilling childhood memories all over his face. For a short while during the fight, Eddie Wineland forgot how to ride a bike, his first school dance, or even how to properly tie his shoes. Fortunately for Wineland, that massive gash emptied out his mind just enough so that he could focus on exerting all of his efforts to land an insane comeback knockout late in the second round to give the bantamweight his first win inside the Octagon.

Shortly after the fight, Wineland took a before and after picture of the souvenir Scott Jorgensen gave him, and judging by the expression on his face — he’s pretty stoked about it. 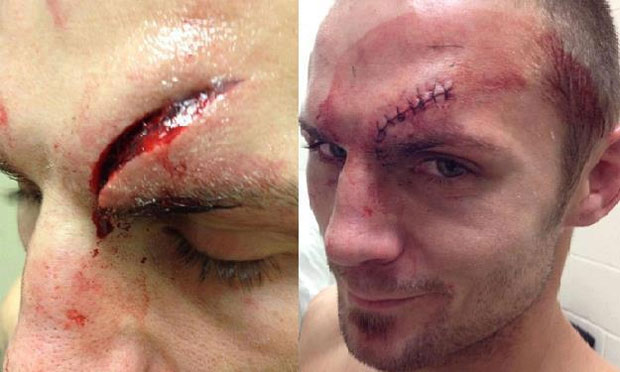 Karo Parisyan questions if the NSAC was 'picking on the Armenian guy' in his previous suspension
Read Next Post →
Click here to cancel reply.