RIZIN Fighting Federation have revealed that Kyoji Horiguchi will be facing Gabriel Oliveira in the quarterfinal of the Bantamweight Grand Prix event on December 29th, in the Saitama Arena. Horiguchi is currently riding a five fight winning streak, with notable wins over Neil Seery and Hideo Tokoro. Oliveira is a fierce competitor who has amassed a 9-0 record, with five finishes. He destroyed Tatsuya Kawajiri in his debut last October.

UFC Veteran Ian McCall is also set to take on Manel Kape. Sadly, the last time we saw McCall was over two years ago when he lost to John Lineker via unanimous decision. Ian McCall has mostly spent the last few years sitting on the sideline waiting for a fight and nursing his injuries. His opponent Manel Kape is currently on a five fight winning streak; most recently defeating Erson Yamamoto by TKO in the first round. The winner of this fight will go on to fight the winner of Horiguchi/Oliveira in the semi-final on the 31st of December.

Takafumi Otsuka will be fighting Khalid Taha in the other quarterfinal match up. Otsuka is a veteran of the sport, amassing a 23-13 record. He usually tends to grind out decisions. As for Taha he is the younger, more aggressive opponent. At only 25 years old, he is 11-0 and is a knockout specialist. This fight will be a true test for Taha, is he a true prospect or is he just another big hitter? We will find out December 29th.

The winner of this fight will take on the winner of Kevin Petshi vs. Shintaro Ishiwatari. Shintaro has a similar style to Otsuka. He tends to win most fights by grinding out decisions; He also is a decent power puncher. In his 23 wins, he has managed get 8 stoppages via strikes. His opponent Petshi is an elite grappler; he has no issues with taking the fight to the ground and getting a quick choke or armbar.

You can watch the fights on the Fite.Tv 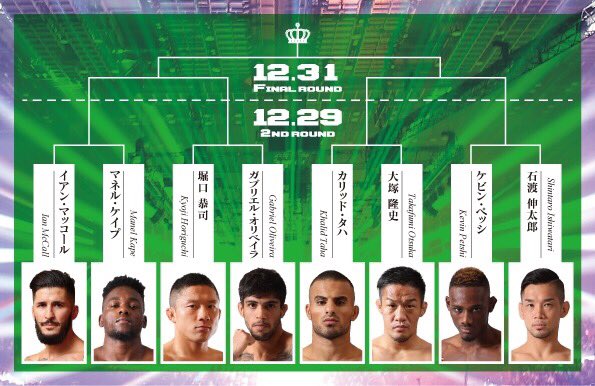