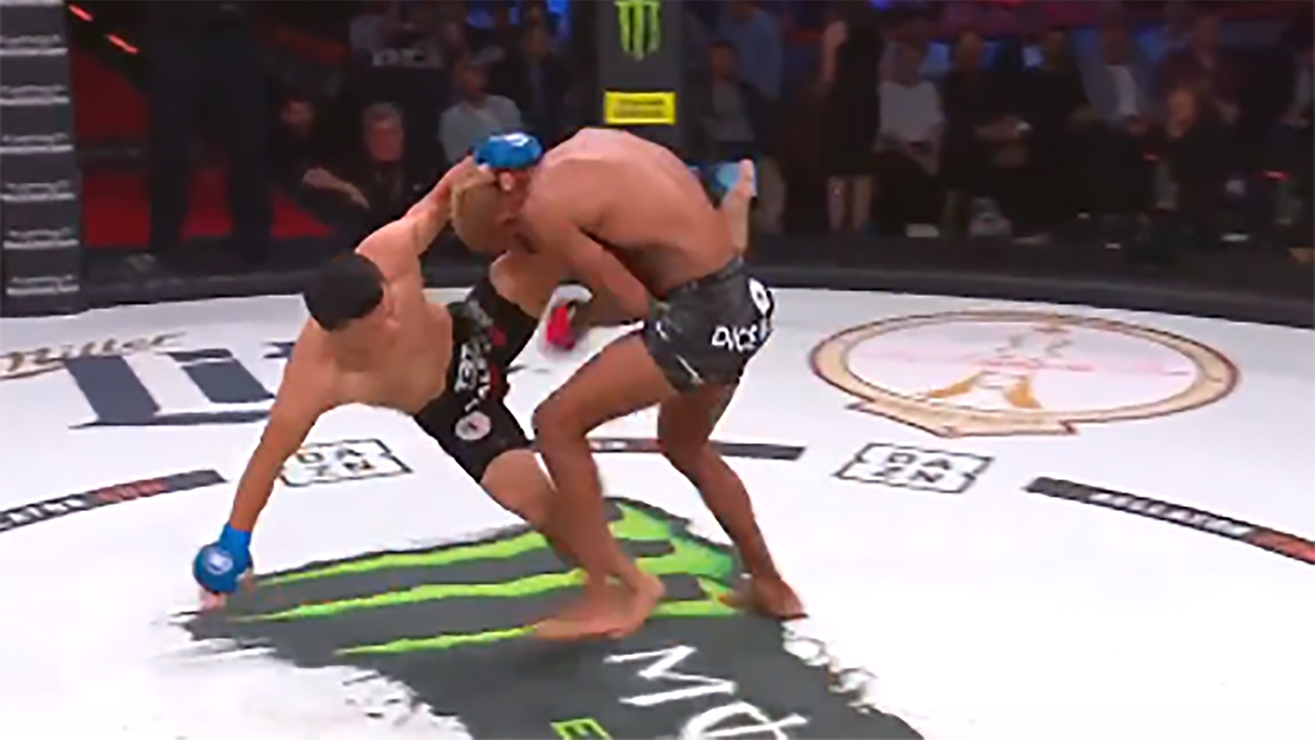 Kyoji Horiguchi Defeats Darrion Caldwell Behind The Enemy Lines, He Is The New Champ!

Welcome to the highly-entertaining Bantamweight match between the inaugural RIZIN champion and the former UFC Flyweight contender Kyoji Horiguchi and Bellator 135-pound king Darrion Caldwell. It kicks off the main card.

The two already met at RIZIN 14, on December 31, 2018, where Kyoji Horiguchi finished his opponent via third-round guillotine choke. Can Darrion avenge the loss? Let’s see! The referee in charge for this contest is Todd Anderson.

Caldwell has a huge height and reach advantage. Sharp glove tap to open the bout. Horiguchi goes for low kicks, but Caldwell attacks to the head.

Pair of kicks to the head for Caldwell, who goes for a flying knee, secures a takedown and smashes Kyoji with a nasty elbow.

Kyoji sits up against the fence, but Caldwell responds with more right elbows to the head. Caldwell tries to pull Kyoji away from the cage but Japanese fighter won’t let him, Caldwell succeeds but Kyoji is against the fence again.

Caldwell controls the position, he lands a nasty elbow and two big left hands. Kyoji could be in trouble, he is pinned to the canvas. Horiguchi complains that rival’s fingers were inside his gloves. The referee sees it and orders them to stand up, warns Darion, and restarts the match. 10-9 Caldwell.

Wow, an outstanding exchange on the feet to open the round, Kyoji looks completely different! Caldwell throwing long kicks to the head and body off the southpaw stance, but it seems Kyoji shortens the distance well. Great punches by the Japanese fighter, but he ate a strong kick.

Takedown Caldwell, Horiguchi against the fence.

Horiguchi sits up against the fence again, Caldwell is all over him, he wraps his arm but Kyoji delivers few short punches. Fighters literally do nothing, the referee should stand them up, it lasts forever! Well, it seems the ref heard me, 30 seconds before the end of the round, he orders fighters to get up at 4:38! The round ends, not much action. I’d say draw, it was a close round.

Both fighters tap gloves, Kyoji throws the first kick. Wow, Kyoji stuffs a takedown like a pro, what a great sprawl, awesome move by Japanese fighter! He fishes for a headlock doesn’t have it but ends up in the full guard.

Caldwell is now in the position of sitting up against the fence with Horiguchi trying to pull him away. Kyoji tries to posture up but it seems Caldwell controls his body and arms well. Kyoji finally sprawls away at 2:51, he blocks a takedown attempt well and ends up back on the top again. Oh, the third round is fireworks!!!

Darrion holds Horiguchi down against the fence. Horiguchi escapes at the 10-second warning, the round ends. This was one close, I am not sure, I think Horiguchi 10-9.

Caldwell looks fatigued, Kyoji grabs a guillotine choke in the clinch, but Caldwell escapes and runs Kyoji towards the fence.

Horiguchi seated against the fence, calmly throwing punches, Caldwell is wrapped around his waist, keeping him pressed against the cage. Hard elbow Caldwell, but not much action, the referee stands them up.

Horiguchi goes forward, Caldwell retreats, switches stances. Caldwell shoots in, but single-leg takedown is stuffed by Kyoji. Caldwell runs to the fence but Kyoji reverses him, great move, and dumps him for a takedown. Wow, this was a close round, maybe 10-9 Horiguchi.

The final round starts. Kyoji goes for a leg kick. Horiguchi leaps at Caldwell, who ducks under and spins him to a seated position. The fans are booing, it seems they want a stand-up slugfest. Horiguchi throws short punches, fishes for a guillotine. Kyoji gives up the choke attempt, half of the round.

Caldwell tries to push Horiguchi off the fence. Horiguchi goes for an inverted triangle but gives up the submission. Wow, what a move by Kyoji, now he lands hammer-fists, but backs down against the fence again. The bell rings, I think 10-9 Horiguchi.

🐺 @TheWolfMMA and @Kyoji1012 kick off our main card with an exciting rematch!
Here is their tale of the tape!#Bellator222 pic.twitter.com/Jb7zzyZRuz

Wasn't easy, but @TheWolfMMA scores that takedown in round two.

Watch the #Bellator222 main card with @DAZN_USA in the 🇺🇸 and @SkySports in the 🇬🇧. pic.twitter.com/9MYvYYN0i8

This third round is 🔥!

The belt is on the line and neither of these two men are going down without a fight!#Bellator222 pic.twitter.com/gTFEwjPZxt

✊@Kyoji1012 is victorious once again and is the new Bellator bantamweight champ via unanimous decision at #Bellator222.