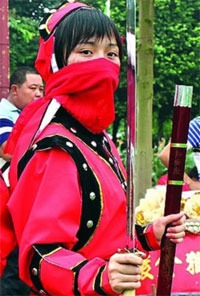 Two sisters host a three-day fight festival and on the last day, whoever can defeat them in a bout will be able to take their hand in marriage. Wasn’t that the storyline behind ‘Being John Malkovich‘ before Spike Jonze was hired to endlessly complicate the entire plot? Maybe I’m thinking about that other movie that involves entering through the back of someone’s head via a small door buried behind boxes in an office.

Sisters Xiao Lin and Yin will stage a three-day fight tournament in Southeast China and the winner will get a chance to propose to one of the sisters. On the first day, the contestants must endure a day-long archery test. Next, potential suitors must carry a heavy weight over sharpened bamboo spears to an undisclosed location. If the contestant hasn’t passed out from sheer exhaustion, on the final day they must defeat one of the sisters in full-contact combat which may include weapon-on-weapon fighting.

‘They can chose open hand or any weapon they wish but we won’t be holding back. If they can’t beat us they aren’t worthy,” explained Lin.

‘We tried dating agencies but the men we met were all to weak. We could beat them easily,’ said Yin.

‘So we went back to ancient ways called Bi Wu Zhao Qin – which was the way warrior princesses would find their men.’

Of course, the kicker is you can’t remove their masks until after you defeat them in combat. Delta has flights departing from Los Angeles to China for only $911. Get your ticket now — or alternatively you can take a trip to Las Vegas and spend every last one dollar bill at Baby Dolls. [Source]

Shane Carwin wishes he had a mullet and will be training for Nelson like it's a title fight in this interview
Read Next Post →
Click here to cancel reply.