With a touch of gloves, both men look confident and they step to the center of the octagon. Zombie walks Ortega down with power punches immediately. Ortega’s change in camp is evident as he continues to pump out sharp jabs at a decent rate.

Relatively little to no action with 2 minutes left on the clock in the round. Ortega throws a hook that causes Zombie to hit the canvas, whether from the strike or a slip. TKZ returns with a head kick and clean power shots.

Round 2 starts identically to its predecessor. The chess match continues as both men continue to feint and read each other. Zombie gets a flurry off against the cage walls and Ortega’s leg is badly bruised. A spinning back elbow from Ortega sends Zombie to the canvas and an all-out war ensues.

They trade power shots and Ortega ends up on top in a mount to finish the round.

Ortega continues to display a sharp jab, landing often against Zombie. Ortega shows multiple level changes and looks fantastic as he lands power shots and leg kicks. Ortega attempts a spinning elbow akin to the ending of the last round, but this time, he doesn’t find success with the strike.

Ortega continues to score with his jab. He looks sharp finding his range. Ortega uses a takedown and catches Zombie with an elbow that cuts the eye badly. The referee stops that action as TKZ continues to wipe his eye.

The fight resumes, with Zombie pouring blood out of his eye. The round ends with Ortega yet again attempting the spinning back elbow.

It’s the 5th and final round and Zombie comes out with more aggression. Ortega lands a multitude of 2 punch combinations. Zombie walks forward and tries to get Brian to the edge of the cage.

With 2 minutes left, Ortega still looks fresh. He continues to pump out and land the jab, circling out of Zombie’s range. He continues his striking master class until the clock reaches 0:00.

Check the Highlights Below:

🔥 Ortega and Zombie are starting to trade!

No fighter fits their nickname better! 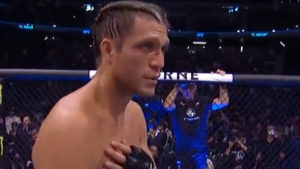 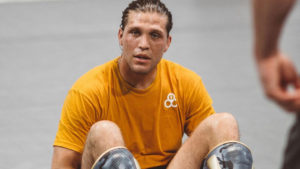 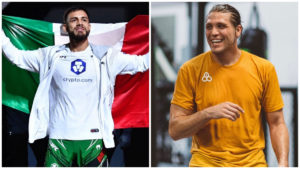 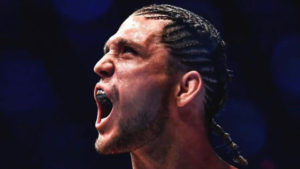