Knight Fighting: 21 vs 21 World Championships from the Battle of Nations

Modern society has gone full circle. Everything that’s old is new, and we got people in armor fighting in Spain.

It’s the World Championships of guys who dress up in armor and hurt each other for no real reward, and it’s fucking awesome. 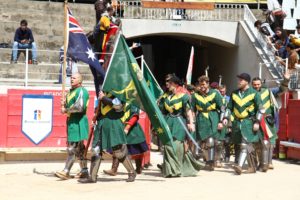 If you aren’t familiar with historical medieval combat, there are a series of match up from 1 vs 1, 5 vs. 5, and individual weapon real winners.  But the real shit hits the fan in the mass fights.

The 21 vs. 21 wars were dominated by the Ukraine and Russian teams.  You can read here of an account from the American team of how hard the Russians are to best.

Check out the video below for the entire day of 21 vs 21 actions.  It starts after the conclusion on women 5 vs. 5.

Tomorrow will be the premier event of the 5 vs. 5 men’s battles.  You can stream it live on their YouTube channel.