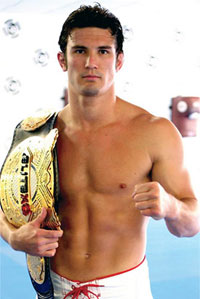 For those of you who aren’t familiar with the Nick Diaz and KJ Noons rivalry, the beef started back in Elite XC where a controversial doctor stoppage handed Diaz his only loss in the past 3 years. Winning a fight due to a doctor stoppage in the first round is a lot like winning a competitive eating contest because the kitchen ran out of buffalo wings. Obviously, there’s unfinished business here. The moment we heard Scott Coker was hosting this rematch, we already knew the 209 would impress us with their linguistic firepower. In fact, Strikeforce’s entire marketing campaign seems to be based around the phrase ‘Don’t be scared, homie’, so you already know this is the start of something special. While the press conferences are still weeks away, here’s the first verbal dagger Noons threw at the Strikeforce welterweight champion.

“I already got one up on Nick. I beat the crap out of the guy. He’s had a good run, and there’s a lot of build-up for this rematch. We’ve both improved, this is a different weight class now, he’s gotten better, I’ve gotten better…it’s a different situation. But at the end of the day, I’m a true mixed martial artist, I have respect for the sport, and I am a good role model… Nick’s good for entertainment, but I come from a family of fighters. I started early, and I have respect for martial arts. It teaches you discipline, how to become a good person, and I feel that I am. On October 9th, I’m fighting a guy that, if I had a kid, I wouldn’t want him looking up to. He’s a trash-talking, pot-smoking chump… This is beyond a grudge match. I’m going to light him up like a Christmas tree. He’s going to have to kill me to lose. It’s very personal.“

The fight goes down October 9th in San Jose, California which leaves five more weeks of verbal warfare. Noons vs. Diaz II has all the makings of a rawsometacular exchange that may end up on a future top ten list. Where KJ Noons smack talk will place alongside Chael Sonnen, James Toney, and Din Thomas’s words of wisdom is still unknown, but we’re proud to see KJ Noons isn’t going to let Nick Diaz have all the fun. [Source] 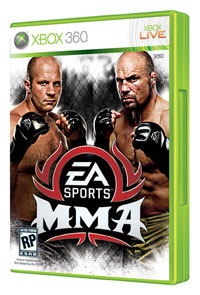 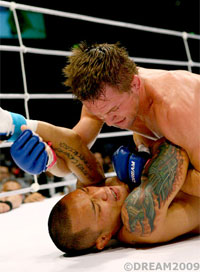