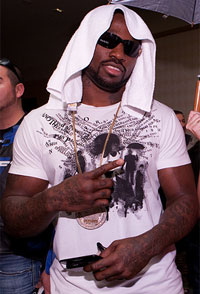 Around this time last year, we were talking to King Mo about his upcoming M-1 Global debut where he was scheduled to bang against Don Frye. In that same interview, King Mo revealed the name of one of the members of his crew of Asian ‘fly-girls’ and even told us that she was the best reggae dancer in Japan. After seeing the video he sent to us, it’s hard not to agree with him.

The past week, I’ve been under the impression that Strikeforce Houston was July 24th but, in fact, my initial assessment is so off that it’s borderline embarrassing. Strikeforce Houston goes down August 21st. During the press conference which was held this week, King Mo made it clear that he has no intentions on getting in a war…with anyone, ever.

“I watch about 10-15 fights a day. I’m always studying guys and learning their weaknesses.”

King Mo has a friend named ‘Daywalker’. King Mo also has a brother called ‘Bull’, a friend named ‘Peanut’ and a close bud appropriately named ‘Ace: The fastest rising pimp in Dallas’. You only wish your friends were that cool. [Source]