Posted on Last updated: September 7, 2010 By: Author Team ME

Whenever you see King Mo, you’re guaranteed to have a coordinated dance number performed by a group of insanely hot chicks. I wish I could say the same for myself. Usually whenever you see me, you’re guaranteed to also see a pair of worn Adidas and jeans that haven’t been washed since Halloween. If you were to see a group of chicks in hot pants surrounding me…it’s probably not me. You have the wrong guy, sorry. If I were to find myself in a scenario that involved a group of scantily clad dancers surrounding me, I would be under the suspicion that one or all of those dancers know kung-fu, is proficient with a set of nunchucks and that I probably owe Dolemite money and this is his way to collect it. Today, we finally have evidence that King Mo can turn into his own personal scantily clad dancer whenever he wants to.

This picture was taken Sunday after an MMA convention at the MGM Grand in Detroit. Apparently James Lee, Rashad Evans and King Mo went out to a few clubs in downtown Detroit after the convention and this picture was captured after King Mo allegedly had only three drinks. Party on King Mo. 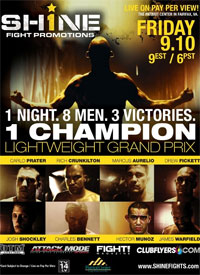 Friday’s Shine Fights will not be sanctioned, all fighters who participate will receive suspensions
Read Next Post →
Click here to cancel reply.