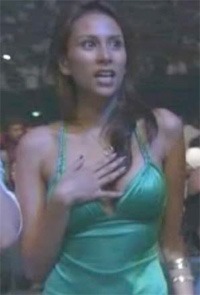 In between listening to the replay of MMAScraps Radio (which gets MiddleEasy’s ‘Rawesome’ approval) and drunk texting my ex-girlfriend letting her know ‘It’s all my fault’, Kid Yamamoto issued a press release last night (early morning in Japan…we think) announcing that he has split with his really, really hot wife and that it was all his fault (dude must be related to me). In the press release, he admits that ‘hanging out with his friends’ was once cause of the divorce (damn, this chick must be related to my ex). Kid Yamamoto also states that he played with his kids too much and was unable to properly educate them. Basically, Kid Yamamoto sounds like every friggin guy that’s reading this. Hot chick gets pissed off at a dude for being a dude. Sounds like a plot for a movie that would star Jude Law. Check out Yamamoto’s press release from the Tokyograph:

Mixed martial artist Norifumi “Kid” Yamamoto (32) and model MALIA (26) have divorced, it was learned on Thursday. Both of them announced the news on their respective blogs.

The couple married in 2004 and had three children together. Yamamoto said that he was completely at fault for the divorce, explaining that he did not seriously help out with raising the kids. While MALIA diligently fulfilled her duties as a parent, Yamamoto only played with the children and was unable to properly educate them. He also admitted that he hung out with his friends even when MALIA was having a difficult time.

Yamamoto said that he still only loves MALIA and hopes that they can remarry in the future.

So now there’s another really, really hot Japanese chick on the market that you will probably never talk to because you’re too busy ranking your favorite Jean Claude Van Damme movies (Don’t even think about putting BloodSport in any other place besides #1).  [Source]

‘My [testicle] is up inside my body.’ – Tuchscherer

Tim Sylvia will be Jason in Friday the 13th

Khabib Nurmagomedov: After I Beat Justin Gaethje, He Is Now Just A Puncher With No Ground Game