Kid Khaos wants your kids to USE DRUGS, but don’t sell them 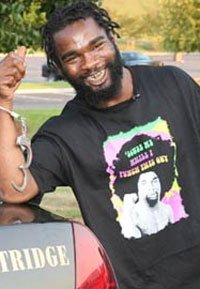 Last night, Sherdog’s Loretta Hunt broke the news that Krazy Horse/Kid Khaos will be fighting on the Fedor vs. Werdum card on June 26th in, you’ll probably need to sit down for this one, a rematch KJ Noons.

Their first bout was held over three years ago in EliteXC’s first event: ‘EliteXC: Destiny’. The event was held in the MMA hotbed of…Southaven, Mississippi. EliteXC: Destiny featured Las Vegas ODB impersonator, Krazy Horse in a grudge match with KJ Noons which actually surprised the hell out of everyone and is a blatant lesson on why should not call out your opponent during a press conference.

Back in November, Krazy Horse changed his name to Kid Khaos in order to be a ‘role model’. Kid Khaos mentioned that ‘he’s training, committing himself to the sport, cleaning up his image and hopefully heading into the best part of his career’. To make this transition, the nickname ‘Kid Khaos’ was ‘meant to be calmer and more controlled than his former incarnation’.

In this interview with MMASpot, it looks like something about ‘Kid Khaos’ has been lost in translation. And yes, we know that Kid Khaos isn’t a Las Vegas ODB impersonator…yet.

Listen to the audio of the interview below by pushing the green ‘play’ button under the picture. I know it’s tough, but I have faith in you. [Source]