Judging from this picture at the ESPYs, ESPN doesn’t even care about UFC anymore

I’m going to put some ice on my ankle for kicking this dead horse, but there needs to be a greater outrage with the amount of baseball plays that are selected for ESPN Sportscenter’s Top Ten list.  It gives viewers a gross misconception that the MLB is actually cooler than what it really is. Let’s face it, the only reason to watch baseball is if it’s October and you want to find a good reason to bet your November mortgage on Alex Rodriguez (you will be let down, trust me).

It’s not that difficult to recall the days in which ESPN was allergic to anything MMA related. Flugtag events would take precedence over two men (or women) competing in the cage under sanctioned rules established by a designated athletic commission. Earlier this year, ESPN thoroughly investigated UFC’s fighter pay structure and concluded there is a significant discrepancy in UFC’s revenue when compared to the money that is distributed to the fighters that are employed within the organization. This, of course, warranted a swift response from Lorenzo Fertitta essentially refuting all that ‘nasty stuff’ ESPN said about UFC. The beef between the two companies has been hovering over the sports world like CO2 emissions in Los Angeles.

We’re not sure if this screen cap (provided by LMW87) from the 2012 ESPY Awards was a subtle dig at UFC, but we do know what ‘UFC’ stands for — and it’s Unidentified Flying Chickens, the best damn chicken in New York. 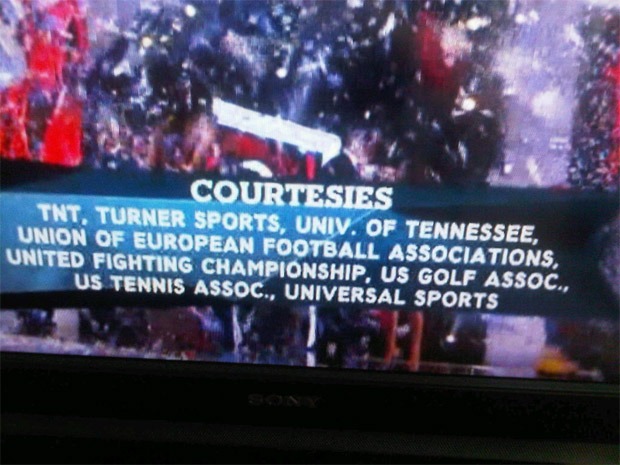 Rumble Johnson is now at light heavyweight and he doesn't want to fight for Bellator, just UFC
Read Next Post →
Click here to cancel reply.