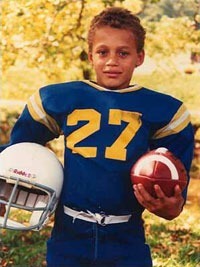 Finally. I’m stoked there’s a Josh Koscheck story so I can use my ‘Throw-back Koscheck’ picture. It’s been sitting deep in our vault where we keep all the children. I mean…the vault where we keep the pictures of children. That still sounds creepy. This picture is from the vault which is filled with pictures of MMA fighters when they were kids. There, all sorted out. No need to get Chris Hansen involved in this.

In an interview with UFC UK, Josh Koscheck told the site that he’s the one to beat GSP and dethrone him from his blinged-out welterweight throne. GSP responded to Koshcheck’s statements by telling reporters: “I drank so much I forgot my whole name“. Actually that’s what GSP said after his UFC 100 victory over Thiago Alves. Dude knows how to party and create a ‘riddum that no one can handle‘. Here’s what Kos said regarding GSP and his upcoming fight at UFC 103:

“I feel that I am the only guy in the weight class that can beat Georges St-Pierre…I feel I have everything to beat him.”

“I just need to win fights…I need to put on three to four impressive fights, but I’m not looking past Frank (Trigg.)”

MiddleEasy will be at UFC 103 on the floor handing out free t-shirts until Dana White kicks us out of the American Airlines Arena. If you’re traveling to DFW for the fight, be sure to hop the gates and get your very own MiddleEasy shirt (you can use it to wipe the blood from your teeth after the security guards throw you out). [Source]