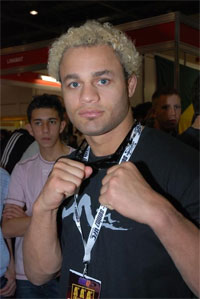 Hockey is a cool sport to accidentally spill your beer over a person sitting next to you and immediately get kicked out of whatever place you were in. This is all from experience, which is the sole reason why I’m no longer a hockey fan. I don’t need to get removed from any more places. I’m the only person in the world that was kicked out of The W Hotel in Hollywood because I wore a full panda bear outfit and tried to order a drink at the bar. At least I didn’t try to ‘tussle’ Koscheck’s curls which apparently results in an automatic arm-break.

The new issue of Maxim features an article about The Ultimate Fighter Season 11 and a brief interview with Josh Koscheck in which he claims that he broke a hockey player’s arm at a rock concert in Buffalo, New York because he played with his hair.

“The only time he’s ever let it come to blows outside the Octagon was at a rock concert in Buffalo, he says, when a player from the Sabres kept slapping his head and tussling his curls. “I warned him to stop, I warned him again, and finally I just said ‘f*ck it’ and broke his arm in half. I’m guessing he told his coach it happened in practice”, he says with a laugh.”

I’m sure there’s someone out there that can track which Buffalo Sabre suffered a broken arm in the past few years. Once that has been established, you should add him to your list of ‘Guys that may unexpectedly tussle my hair’. [Source] 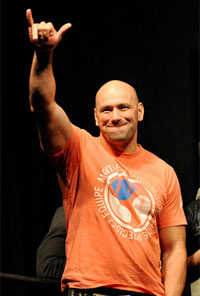