Josh Barnett will be wearing wrestling boots at Impact FC 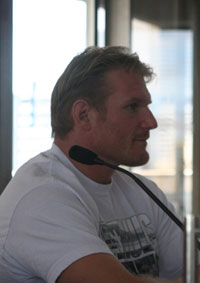 We’ve implanted one of our guys in the heart of Australia like some half-assed attempt at being an international spy. Impact FC Brisbane is about to kick off this Saturday and it features Josh Barnett, Geronimo Dos Santos, Karo Parisyan, Carlos Newton, Sokoudjou, Jeff Monson but unfortunately Paulo Filho will not be there. Filho was initially scheduled to fight in all three of Impact FC’s cards this month until the athletic commission informed him that if he wasn’t Chris Leben, fighting in consecutive cards is an impossible and unhealthy feat.

Some items that our photographer noted were that all bouts are going to be held under the ‘Standard Unified Rules’. Brisbane has no official sanctioning body so they will be importing the commission from Sydney, Australia. The cage will be the same dimensions as the UFC and they will be wearing gloves made by Weapons Of Mass Destruction.

At 11:00 am the press conference started however Karo Parisyan’s opponent did not show up. Another no-show was Jeff Monson who apparently was delayed in transit but is expected to be there tomorrow for the weigh-ins. Questions were raised over Monson’s possible visa discrepancies because of his criminal record for ‘Anarchistic behavior’. It was also noted that he has a fight in Montreal, Australia on the same date which has not been ruled out. All they could say was that he was definitely on his way. Josh Barnett also asked if he could wear wrestling boots. The answer was obviously yes (because who really wants to be that guy to break the news that he can’t?).

Towards the end of the press conference, Karo’s opponent arrived. According to our photographer, he appeared to be a ‘nervous’ twenty-three year old who immediately started taunting Karo regarding the people he has fought in his career. Jeff Monson’s opponent is a Brazilian guy who has a record of 28-3 (although on Impact FC‘s site, he is incorrectly listed as ‘Brad Morris’).

Oh, and apparently Geronimo Dos Santos is a very large dude which may throw Josh Barnett’s sodomy plans right out the window. 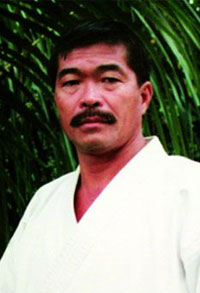