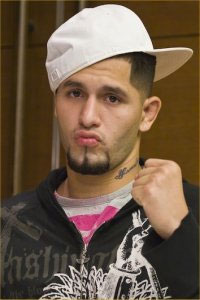 It’s tough to be known as the guy who was caught in the submission of the decade. Toby Imada informed the world what an inverted triangle looks like if properly executed inside an arena at Dayton, Ohio and it was all at the expense of Jorge Masvidal. Despite losing his most recent bout with Paul Daley at Shark Fights 13, Jorge Masvidal told Buddhasport that he just signed a six-fight, two-year deal with Strikeforce and that he wants an instant title shot.

“I signed a 6 fight, 2 year deal with Strikeforce. Let the world know I am going to knock out everybody they put in front of me. I don’t have an opponent yet but I want a big fight; you know. I want Melendez or the next big name. No B level fighters. Beerbohm is good but nobody really knows him. I would like to get Kawajiri, that would be great.”

Masvidal says he doesn’t want a fight with Beerbohm (who’s never been defeated) because ‘nobody really knows him’, but then elects to go for Tatsuya Kawajiri, a guy who he assumes is more popular than Fancy Pants. My love for Japanese MMA is superfluous, but in the mainstream MMA culture, I can’t present an argument in which I can safely say Kawajiri is more popular than Beerbohm. Just can’t do it. [Source]