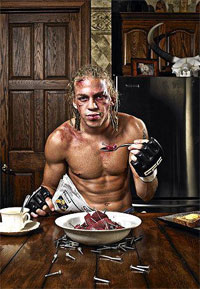 I’ve never met Jonathan Brookins. Neither have you. See, we both have something in common. We’re probably related. You’re probably my distant cousin, so the next time I’m in [insert your city], I guess that entitles me first dibs to crash on your sofa. Excellent, that’s exactly how I envisioned my life. Sleeping on a potpourri of sofas across the planet. If you have roaches that scavenge around your apartment at night, don’t worry, I know how to defend myself. Your roaches will not impede my need to sleep on your sofa. Insects and humans, we can all coexist in your apartment. No peace treaty needed.

Tonight was unique in the fact that if you had two televisions, you were an MMA media king. With the TUF 12 finale airing exactly the same time as Strikeforce: Henderson vs. Babalu created somewhat of a problematic scenario for everyone’s attention span. I was fortunate enough to live on the west coast of America, which enabled my viewing of the TUF 12 finale to be delayed by hours, Bellator style.

Despite some questionable decisions on the card (RIP Nam Phan’s luck), it should not overshadow the fact that Jonathan Brookins came in to tonight as a definitive underdog and managed to win a unanimous decision over Michael Johnson. Congrats goes to Brookins on being the winner of The Ultimate Fighter Season 12 and hopefully we will get a chance to sponsor one of his after-parties in the near future.