After a weekend full of tweet jokes, photoshopped gifs and caustic hate filled messages there’s nothing I can say about this Jon Jones DUI incident that hasn’t already been said 1437 times over via Twitter, Facebook, or any of the multitude of MMA forums on the Interwebz. Until this morning there had been no official word released by the champ regarding his weekend brush with the law and brush with a very dangerous situation. Today at around 9am Jones issued an apology to his friends and fans via his Facebook page. Here’s the text:

“Man I haven’t added anyone new to my Facebook page in like three years and right now I’m so glad that I haven’t. It has literally been sickening to have so many people try to kick me while I’m down. At the same time, I totally understand, I gave them the leeway to. I screwed up, big time. Just needed to say thank you to all you guys for being amazing friends/supporters.
Always having to deal with so many critics, haters and fickle mma fans, I almost forgot how strong of a home base I had (607 and people that knew me before I was a champion fighter). Although the hell that will come with this hasn’t even started yet, I want you guys to know how much better you’ve all made me feel, not only about this situation but about life, everything. It’s good to feel that people are there and care. With that being said, I felt I should apologize to you first.
I’m truly sorry to those of you that I may have embarrassed in any way, to those of you with kids that I may have let down. I will prove to them as well as to myself, that no matter what is happening in life, we can always work our way back and make things even better than before. Reading you guys uplifting comments was a great reminder for me to not give up on who I am or all the hateful people. I’m not gonna allow this situation to outweigh the positive. I love you guys right back and I promise to make things right. PS sorry about the terrible grammar :)”

Whether you love him or hate him-or whether you call it a mistake, a lack of good judgement, or an absolute **** up-this is definitely going to be a huge life lesson for the very young champ and the most important thing to note is thankfully no one was hurt in this accident. Things could have turned out much worse than they did.

Update: Here’s a screenshot from Bones’ Facebook page of the statement. 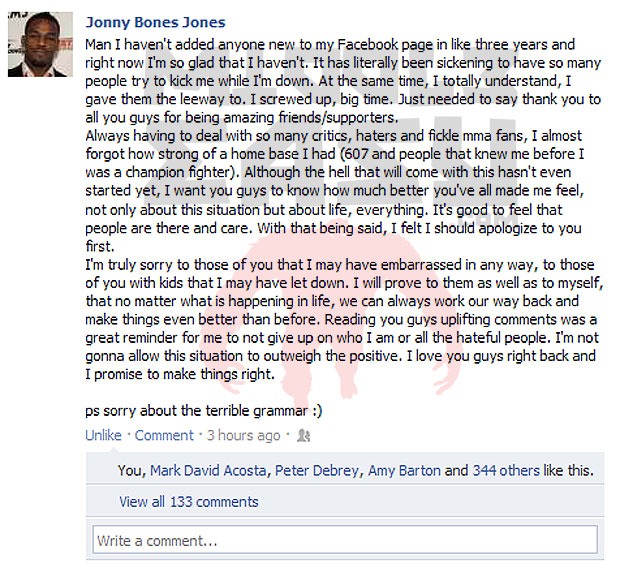 Josh Barnett and Mega Megu may have lost this weekend, but they still have each other
← Read Last Post

OOPS! Anderson Silva remembers he still has a mic on after he calls Vitor Belfort a coward
Read Next Post →
Click here to cancel reply.