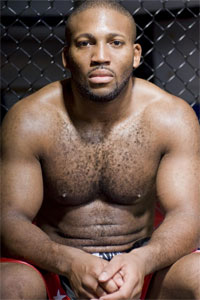 John Howard drives a 1994 Honda Accord and he doesn’t really care what you have to say about it because it makes him happy. I can relate to that. I drive an ugly, smurfy blue Hyundai. I will drive it until the wheels fall off or until Zeus starts paying me enough to buy the 2011 triple black Dodge Charger I really want so I can pretend I’m a street racer like Michelle Rodriguez in the movie Fast and the Furious. I think the chances of my wheels falling off are a ton more likely than getting a fat paycheck right now. FML. Well, at least John Howard has the option to upgrade whenever he wants though.

In a recent interview on Heavy.com, Howard reveals himself to be a pretty humble dude despite his four-fight win streak and having one of the baddest haircuts in MMA. From not wanting his fans to address him as sir, sleeping on the dirt under a ring in Thailand, to driving that 1994 Honda Accord with the ‘messed up locks and tires’, Howard says that all of it makes him happy.

“That’s what makes me happy. That’s the type of guy I am. I don’t need certain things to make an impression. I tell people be happy with what you got. I am too.”

Remember, if you ever want to kryptonite John Howard into being your BFF, just call him ‘Doom’ and take him out for some Reese’s Pieces and Sprite. It works every time. [Source]