Some of you may remember John Cholish from last weekend’s UFC on FX 8 card in Brazil in which he took on the Herculean Gleison Tibau, and eventually getting tapped by a guillotine in the second round. Rumors were circulating that if Cholish did in fact lose last weekend, he would retire from the sport. Not only did Cholish hold up his word, but apparently it appears he’s bitter that the pay discrepancy in UFC needs to be ‘a little better.’

“I’m fortunate enough that I have a job that provides for me really well,I give a lot of these guys credit that fight at this level. I think they could be compensated much better based on the income that the UFC takes in. Fortunately, I can just walk away and I’m OK with it. By no means do I mean it disrespectfully toward any other fighters because I think they do a great job. But hopefully Zuffa and the UFC will start paying them a little better.”

Last night on Twitter, Cholish published the following email he received from ZUFFA in regards to a 27% tax being levied on his fight purse — a tax that I assume was also placed on every participant in UFC on FX 8. Check it out. 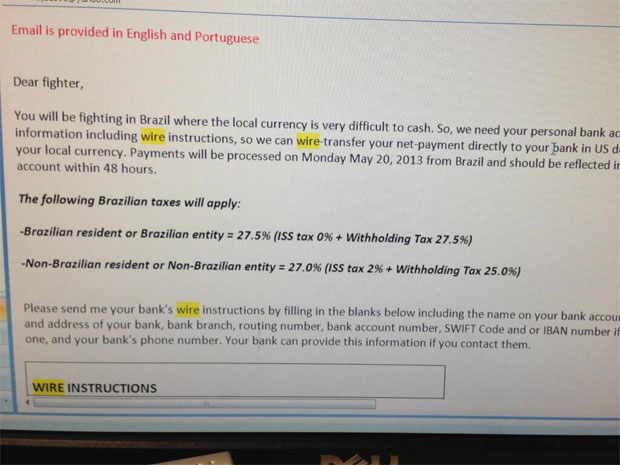 Bibiano Fernandes was forced to live in the Amazon jungle and build shelter from branches at the age of seven
Read Next Post →
Click here to cancel reply.