It is no secret that transgender athletes have always been a sensitive topic in combat sports, and Joe Rogan has been outspoken about it.

She calls herself a woman but… I tend to disagree. And, uh, she, um… she used to be a man but now she has had, she’s a transgender which is (the) official term that means you’ve gone through it, right? And she wants to be able to fight women in MMA. I say no f***ing way,” Rogan said.

I say if you had a dick at one point in time, you also have all the bone structure that comes with having a dick. You have bigger hands, you have bigger shoulder joints. You’re a f***ing man. That’s a man, OK? You can’t have… that’s… I don’t care if you don’t have a dick any more…”

She’s not just huge, she’s got a f***ing man’s face. I mean, you can wear all the lipstick you want. You want to be a woman and you want to take female hormones, you want to get a boob job, that’s all fine. I support your life to live, your right to live as a woman.

Fight guys, yes. She has to fight guys. First of all, she’s not really a she. She’s a transgender, post-op person. The operation doesn’t shave down your bone density. It doesn’t change.”

Rogan got a lot of backlash from the trans community for his comments; however, he stood by them.

In a recent episode of The Joe Rogan Experience, Rogan spoke about trans athletes competing in combat sports again. While watching former UFC featherweight champion Germaine de Randamie fight a man in 2007,  Rogan said he doesn’t mind if women fight men if the decision is voluntary.

“I don’t mind it if it’s voluntary. Germaine de Randamie is a multiple-time world Muay Thai champion, she’s a fu*king assassin. She fought a dude,” Rogan said. Anyway, she flatlined a dude with a straight right. But she’s a fu*king straight killer. She’s a straight killer. I would never want to tell Germaine de Randamie that she can’t fight that guy. She can do whatever the fu*k she wants. She’s a badass… So this watch that again, because this dude is teeing off on her, and she’s just she’s trying to fire back and then ding! Her straight right is a goddamn piston. She’s a killer. She flatlined that dude, that’s hilarious. I mean, so I’m 100% for that.”

The thing that Rogan is against is people saying there aren’t advantages for trans athletes. Although he supports transgender people in general, his stance changes when it comes to professional sports.

“But what I’m not for is us pretending that someone who’s a biological male doesn’t have advantages, especially when we’re really blurring the lines of like, how long do you have to be? Identify as a female for like, how long? How much hormones do you have to take? People will talk about outliers. There are outliers,” Rogan said. “It’s a good conversation because there are people like Roy Jones Jr. In his prime, he was an outlier. He was so fast. He had such advantages over the average person just by nature of being born Roy Jones, Jr. But we accept that in the spectrum of males. But the difference between what you’re saying is, that the spectrum of males – a person that is not really training would not be competitive against the males but still would be against the females because it crosses over where it puts you in like a journeyman female pro fighter.”

Fox hasn’t competed since 2014; however, last year, transgender fighter Alana McLaughlin competed for Combate and submitted her opponent, which caused an uproar in the MMA community. Rogan got whipped for his comments about her.  The longtime UFC commentator also heavily slammed Fox during her short-lived fighting career, calling her a “f****** man”.

Later, he recalled being called a bigot for disagreeing with a transgender woman in MMA. Instead of relying on onlookers, maybe Rogan should bring on a transgender or gender-fluid athlete on his podcast to discuss their perspectives? 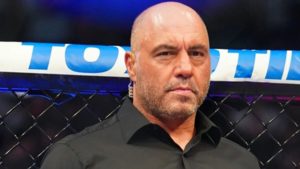 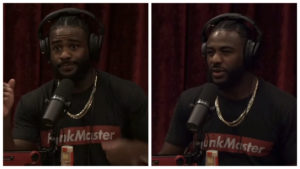 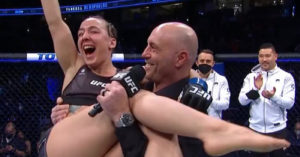 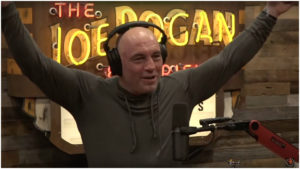